I belong to a Harley-Davidson motorcycle-related discussion forum on the internet. Recently, someone posted this question:

Would any male motorcycle rider make a trip (say a few miles) while allowing a man to ride (seated) behind them on the their bike? Or vice versa?

You can tell from the way the question is worded that it is already prejudged against two guys riding together.

As of the time I was writing this blog post, there were 30 replies. There were three types of responses:

1. “Only in an emergency” such as this: I would ride a guy ONLY if his bike was broken down. I would need an excuse to spout verbally.

2. “Give a ride to share the fun” such as this: I have given those less fortunate to own a Harley or any bike for that matter the thrill of being on one. Takes a few days for them to get the grin off their face…lol. None of them had any issues with their ego and I am comfy with myself.

3. “Incredulity” such as this: back in time it was normal to see two guys on a bike…..man how times have changed. Other related statements included riding with male family members (family doesn’t count) or two males riding in Europe — apparently it’s not an issue Across the Pond as some people make of it here in the U.S.

This thread of dialogue is, to me, a demonstration of the ongoing tension felt by straight guys who are insecure with their own sexuality and gender that they feel that they have to demonstrate the hypermasculine male image on a Harley, which means never carrying a male passenger unless the passenger is your son or nephew, or a friend who had an emergency. There were, unfortunately, a number of homophobic responses to that discussion — and some who even said that they were proud of their homophobia. Pity their small little minds….

In my opinion — it shouldn’t matter if a guy rides as a passenger on a Harley being driven by another guy. My partner and I rode all over the country that way, and never once — even in the Bible Belt where homophobia is omnipresent — did anyone say anything. We weren’t waving the rainbow flag or strutting around in our chaps (without any other clothes on), but we also weren’t hiding the fact that we were very close; staying in the same hotel room; speaking with words like, “our”, “us”, “we” and so forth. It was pretty clear that we were not related (such as brothers).

I think the on-line Forums tend to bring out the most outspoken, and do not necessarily demonstrate the majority of the thinking in the country, or the world for that matter.

My perception: secure men don’t care. If you worry about whether anyone is going to question your sexuality or gender by giving a male passenger a ride on your Harley, then get some professional help to work through your gender identity issues. Secure straight men as well as gay men have it figured out already.

Life is short: stop worrying about what other people think, and be yourself. 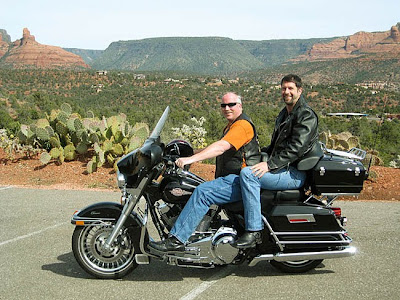 This is a photo of me with a friend. I couldn’t find one of me and my partner in digital format that would illustrate the point of this post.