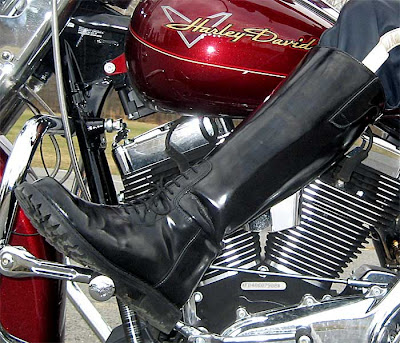 I know it is risky to say “best” when referencing anything, as different people have different opinions. Cops have worn Dehner Patrol Boots for years, and you will see many motor officers also wearing Chippewa Hi-Shine Engineer Boots, especially on the U.S. East Coast. Both of these companies have large production facilities and have the resources, equipment, staffing, and demand to make a lot of boots for the motorcycle patrol boot market.

I found out about All American Patrol Boots several years ago, but was stymied in finding a way to buy them. The company’s website has not been refreshed since 2002, and they are poor about answering email or returning messages left by phone. However, eventually I found a way to get a pair of these boots through a third-party retailer (which was also a pain in the butt to deal with.)

I got these boots at the end of February after a long five-month wait. But man, was it ever worth the wait! I have worn these boots a lot, including for several rides on my Harley. They are comfortable and perform well. What I mean by that is that the boots flex well at the ankles, without “grabbing.” The entire boot is made of leather, unlike stock Dehner boots which are made of a combination of leather for the foot and plastic “Dehcord” for the shafts.

The sole that came with this model (905L) is a Vibram 100R, which is a heat-resistant, thick lug sole that does not leave black melt-marks on hot motorcycle pipes nor mar flooring if worn indoors. Because it is a big-lug Vibram® sole, it provides excellent traction, especially when holding a big throbbing motorcycle while stopped. Lug soles are also especially good for holding a big heavy machine on a hill.

These boots keep an excellent shine, which is easy to maintain with a quick spray of furniture polish and a buff with a terrycloth wipe. I’m like most guys, and don’t get crazy if my boots get dirty from wear, but I like how they look when well-shined. When boots are easy to keep clean and shined with just a minute’s attention, they get my vote!

These All American patrol boots have a bal-laced instep, which is a traditional style for motor officers. The boots also have a buckle closure at the top of the shaft. A buckle there is so much better than laces, which can become untied when blown in the wind while operating a motorcycle and thus are a nuisance to have to re-tie often.

If All American had the production capacity to compete with the Big Boys (Dehner and Chippewa), they could give these guys a run for their money. The cost of the All American Boots made custom to my calf and height requirements was 3/4 of Dehner stock boots cost (MSRP). They are a great value for a very high-quality product.

That’s why I am raving about these boots, and call them the best. This is just my opinion, but I’ve been around the block once or twice, have ridden hundreds of thousands of miles on a motorcycle while wearing many different motorcycle boots, so this opinion is grounded in experience.

Here’s a video that I made recently describing these boots and showing them in action on my Harley. Enjoy!

UPDATE: If you arrived on this blog post looking for a recommendation on a great general all-around motorcycle boot, read this post, here.