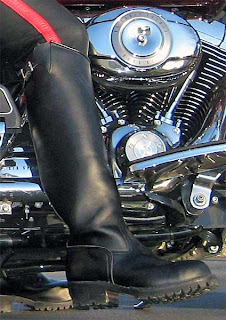 I published my “Guide to Motorcycle Boots” in January. It has gotten a lot of visits, especially since Larry linked to it from hotboots.com and featured it for about a month from his home page. Thanks, Larry — I have received about 1,000 unique visitors each day, many of whom are coming from the hotboots website. Well that, an also a couple of motorcycle enthusiast websites that have linked to it, as well.

The risk I took in posting that Guide is that the President of a company that sells motorcycle boots found my site and noticed that I did not mention that company’s boots in the Guide. She expressed her disappointment that the boots were not included.

I replied to her, and said, “yes, it’s true, I am aware of your boots but I do not own any, so I wrote the Guide based on my own experience.” I then offered to include a mention of her company’s boots if she would respond to several technical questions about the soles and boot construction. I explained that I thought the soles were made of soft rubber which can leave melt-marks on hot motorcycle pipes. I asked her about the construction of the boots. Goodyear welt? Leather lining? Thickness of the leather? Origin of the leather? I also asked her to describe or defend my perception of value. The boots seemed to be priced rather expensively compared with other motorcycle boots of the same height and style made by others. Could she defend the pricing based on quality of materials and construction?

I have not received a reply (yet). It’s been over a month, so I don’t expect to receive one. She learned that I know a thing or two about boots and the questions to ask. By her failure to reply, it indicates to me that perception is reality: the boots are overpriced and use materials of lesser quality. I’m still willing to change my perception, but she has to answer my email. Failure to do that results in no change (of my motorcycle boot review page or my mind.)

The point of this post is to read things like my tutorials carefully. If something or a particular manufacturer’s product(s) are not mentioned, there may be a reason for that — or I simply may have overlooked it. But it’s more likely that I don’t say something for a reason. If you wonder why, just ask.