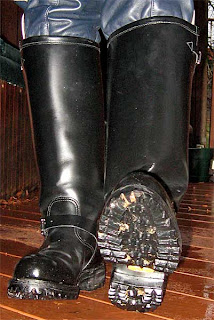 Have you ever had one of those experiences where you saw something that someone else was wearing and you said to yourself, “I’d like to get that!”

That happened to me in May. I saw a motor officer at the Law Ride® in Washington, DC, who was wearing — as a number of cops were — a pair of Chippewa Hi-Shine engineer boots. What I liked most about the boots, though, is that they had a thick, Vibram® 100 lug sole. I blogged about it here.

I started hunting for those boots, and spoke with someone at Chippewa, who said that they don’t make them, and confirmed it with Mike, owner of Stompers Boots of San Francisco, and Ron & Rich, owners of Big Black Boots. The boot retailers seemed to think that there wasn’t much of a market for them. I beg to disagree.

I was hoping that perhaps Chippewa, owned by Justin Brands, Inc., might consider offering their Hi-Shine engineer boots with lug soles. Lots of cops that I spoke with then, and many more since, have told me that they would like to get the boots with that sole and not to have to go through the trouble of finding a cobbler to add the sole later. (Hmmm, perhaps my loyal lurker from Justin Brands might see this and pass it on to the appropriate people?)

There were some of us, for example, who were disheartened when Chippewa discontinued offering lug soles on their shorter oil-tanned engineer boots. Nothing is wrong with the soles on their boots now — there are some of us, cops included, who prefer soles that offer the ultimate traction when we ride our big machines, plant our boot on the ground at stops, and when we ride in parades or other slow traffic, need to have a lot of control by using the boots to help us control speed (or crawl), very frequent stops, and maneuvering procedures, such as “walking” the bike forward and backward when parking.

Well, anyway, after all this talking and looking and thinking, I just got myself a new pair of Chip Hi-Shine Engineer Boots with Vibram® 100 lug soles! Whoo-hoo!

Since I already have a pair of these boots, some have wondered (my partner being among the first) why I wanted another pair of these boots. In fact, I had “lug-lite” soles added to my existing Chippewa Hi-Shines by a cobbler in June.

Well, the answer is in learning that my very favorite boot retailer, Stompers Boots, is in such a dire financial condition due to the crappy economy that Mike, the owner, may have to close the store next year. I thought, then, I’d throw some more business his way to try to help out, and get the boots now, rather than wait indefinitely. (And if you’re a Bootman like me and like what Stompers has to offer, this is a suggestion to get your orders in now!)

Life is short: Wear your boots! (I sure do!)