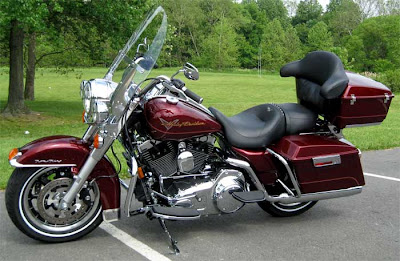 My new Harley-Davidson Road King has a classic heel-toe shifter and foot boards, rather than foot pegs and a single foot-controlled peg shifter that was on my Low Rider.

Having a single peg shifter definitely influenced the choice of boots that I chose to wear on the Low Rider. The shifting pattern was one press down on the shifter for first, then four upward motions on the shifter for the remaining four gears. Because you had to put the toe of your boot under the shifter to get into higher gears, boots would have to be able to withstand the pressure and regular scraping against the shifter. I could not wear cowboy boots, for example, because the left boot would be badly scuffed from shifting gears. 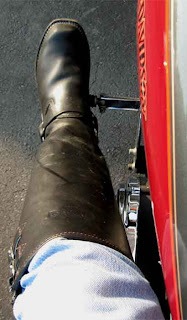 A heel-toe shifter allows you to shift down for first gear with your toe, but then the upward shifts through the range to sixth gear can be done with the heel of the boot. So I no longer will encounter the “shifter scuffing” problem.

Will that change the choices of boots that I will wear on my new bike? Probably not. I still will choose boots that have a lug or rubber sole, because of the traction such soles provide when the bike is stopped. Also, non-bikers do not realize how much a biker has to move a bike by “walking it” while seated on it, such as into a parking space, or getting into a riding formation when riding with a group. 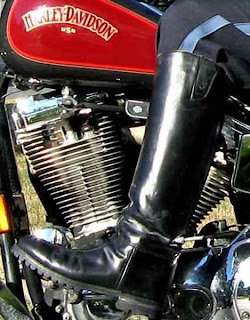 Well, I do not really think I’ll have a problem having enough boots to wear on the new bike. And since I’m not a fashionista, I will continue to choose boots that feel good, are practical, and are comfortable for a long day’s ride. It’s not the looks or (heaven forbid) color-matching the bike’s deep red color — it is the practicality and comfort that matter most to me on the boots that I choose to wear both on and off the bike.