This question was posed, where else, but in a Google search and it ended up on my website.

The answer to the question, “are Frye Boots good for motorcycling” is “mostly no” with a few exceptions. 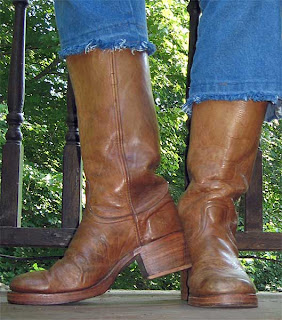 The reason why the answer is “mostly no” is that most vintage Frye boots were made with a smooth leather sole, as shown here on a pair of vintage Frye Boots of the ’70s. Boots with a smooth sole are a poor choice to wear while operating a motorcycle simply because the soles do not provide traction which is required to hold the bike at a stoplight or whilst maneuvering into a parking spot. In fact, smooth-soled boots like most Fryes and cowboy boots are very likely to slip on pavement. Why? Pavement, particularly asphalt parking lots, is a repository for oil. Most people think, “my car doesn’t leak oil, so why worry about it?” Cars drop a drop of oil here and there, particularly while hot, and just parked.

Slipping while parking a bike is, according to NHTSA, the third-most leading cause of injuries to a motorcyclist, after a crash or driver error (dropping the bike or running off the road.) You see, if your boots slip under you, you put enormous pressure on your ankle while trying to prevent the bike from falling over. There are a number of ankle sprains, strains, and breaks reported. Believe me, I know how fragile the fibula is (the smaller of the two leg bones that go into the ankle.) It can snap and break when such sideways pressure is applied to it. 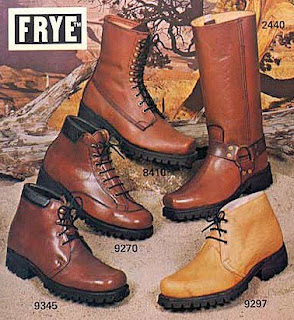 Back in the day when Frye Boots were made at the original plant in Massachusetts, the company did make a line of boots with lug soles suitable for use while operating a motorcycle. (Image from a 1975 Frye Boot Catalog.) Today, there are some Frye boots made in China that have a rubber sole. (The Frye Boots made in the USA plant in Arkansas nowadays are the campus style, which have smooth leather soles.)

Unless your choice of boots has at least a rubber sole — preferably a lug sole — then do not use them while operating a motorcycle. Sure, you’ll be fine while the bike is in motion. You may have serious trouble when you have to stop.

In summary, it’s not the boot, it’s the sole. And in post-summary, repeat after me: “boots are for motorcycling, sneakers are for the gym.”

Life is short: have sole.