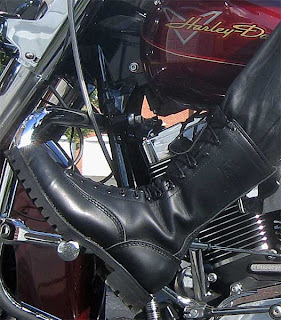 A question like this was posed on the “boots on line” board a while back. Someone I know who goes by the screen name “KneeHighGuy” (KHG) wrote a great response to that, and I invited him to post that response here as a guest blog. I hope he will do that, eventually.

So… back to the question, “does wearing boots make a man masculine?”

My opinion: No. Simply wearing boots does not make a man masculine.

I have said it before and I say it again, masculinity is a set of characteristics that is demonstrated by self-confidence and a secure nature. Physical characteristics play a part, as well — how a man appears to others, including the style of dress — influences perceptions of masculinity both for the guy and others observing him.

Boots are a part of a man’s choice of style of dress. Looking back over the ages, men wore boots. From soldiers to cowboys to construction workers — all considered to be “masculine” professions — men in these occupations wear boots. Boots convey a strong sense of masculinity. KHG said, “When I think of masculinity, words such as honor, courage, strength, and gallantry come to mind. A man with these qualities is the kind of man I admire and aspire to be, and wearing boots helps give me confidence that I can be that kind of man.” I couldn’t agree more.

Simply wearing a pair of boots does not “make” someone masculine. Boots, however, are something worn with clothing that has a masculine appearance: jeans, leather, uniforms, or even business suits (a uniform of sorts). How a man behaves and projects himself has more to do with his perception of being a masculine man than what he wears.

These are my thoughts. What are yours?

1 thought on “Boots and Masculinity”