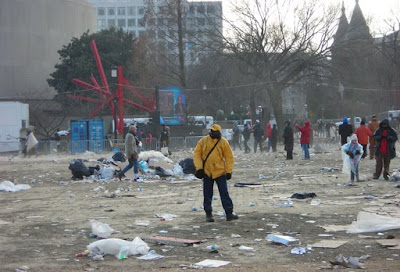 My goodness, my hometown is still a trash heap after the concert at the Lincoln Memorial on Sunday, the Presidential Inauguration and Parade on Tuesday, and the right-to-lifers lame protest on Thursday. While one conservative blog is blaming all the trashing of DC on supporters of Obama, what it isn’t blogging about is all the trash left behind by the right-to-lifers on Thursday. Most of them are (R)-people, and are just as messy as anyone else.

Thanks for coming, thanks for spending over US$1,000,000,000 (yeah, that’s right, US$1 Billion) for our local economy. But thanks also for leaving over 90 tons of trash that’s blowing around the city, and thanks for absolutely ruining whatever turf there was on the national Mall. It’s all a big dirt pile now. GO HOME! … and take your trash with you.

This video that I found on YouTube is interesting, and at least shows a positive attitude about cleaning up the mess:


Thanks, also, for breaking all ridership records on our subway. According to Metro, “With hundreds of thousands of people in town for the Inauguration of President Barack Obama, Metrorail set a new record for the transit agency’s highest ridership on Tuesday, Jan. 20, when rail rides alone accounted for 1,120,000 trips surpassing the previous Metrorail high of 866,681 trips, which occurred the previous day, on Monday, Jan. 19.”

Our city is trashed, our Metro is limping toward recovery, but the local shops, restaurants, and businesses are enjoying an economic boom from all the food & drink you bought, as well as the trinkets and treasures you took back home with you. (A “snatch” from a post-inaugural “deal” got me a really warm Obama sweatshirt for US$1 this morning — and you lucky visitors paid US$35 for it earlier this week. ha ha!)

Us locals just want some peace and quiet. Sheesh! What a week! 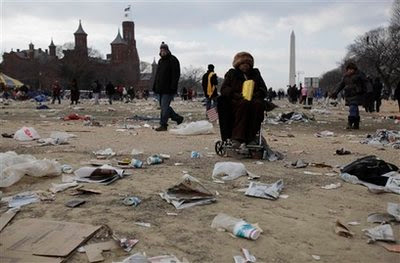