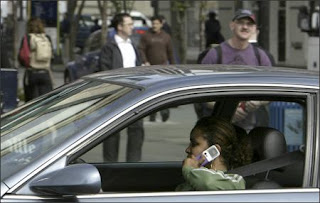 This is a post about my ongoing tirade about those nuts who yak away on their precious cell phones while attempting to operating a 5,000+ pound machine. Hang the f— up and drive!

After witnessing a fellow biker get creamed on a highway five years ago by a cell-phone yapping yuppie who said, “I didn’t see him,” I have been on a tear to get my state’s legislature to adopt a law to ban using a cell phone or texting while driving. Ideally, ban all forms of communication in all ways while driving — and that includes using hands-free devices.

Well, that ain’t gonna work. (The hands-free ban)… but, here I am again facing this year’s legislature where the senator from my district has proposed, once again, a law to prohibit talking on a cell phone or texting while driving. Yeah, Mike, I’ll be there with you, again, to testify on the bill and attempt, once again, to persuade the committee to pass the bill out of committee to the full State Senate and then to the House and get signed by the Governor. 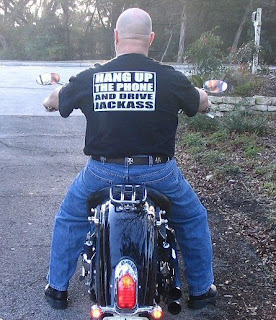 [Oh man, do I feel exactly what the back of the shirt in this photo that I found on the ‘net expresses.]

But again, I remain skeptical. I mean, after all, with a part-time legislature who lives, eats, and breathes on their electronic gizmos to talk, text, and even to write legislation while driving (honestly, you should see the laptop setup in one Delegate’s car!), I just don’t think it’s going to work. But we’ll give it the old college try, once more.

And I still have my doubts after observing what happens when a law is passed, but not enforced. I work in the District of Columbia. DC passed a law two years ago that prohibited use of hand-held cell phones while driving.

I often take walks at lunchtime. For the past several months, I have stood on a busy corner for about 5 minutes and counted the number of drivers who go past and who are yakking on their hand-held cell phones. On average, within five minutes, I count 89 drivers yakking away on hand-held phones. I have never once seen anyone given a ticket for the offense. So I question, why pass a law if it isn’t enforced?

Come on, people! Wake up! We managed to survive quite well in the era before cell phones were invented. I know some of you don’t remember that time, but we didn’t communicate back then by chiseling on stone tablets, either. The world still turned ’round, and business still got done when you couldn’t yak away on your cell 24/7. Just be reasonable: hang up and drive!

Rant ended… for now. Look for me in Annapolis this session, once again, where I’ll continue to bang my head on the proverbial marble wall about this issue.