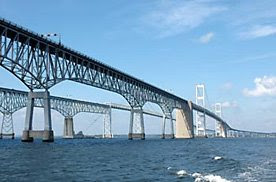 Day One of my “Staycation” found me fulfilling a promise to someone who I befriended 25 years ago but with whom I had lost touch until she Googled my name and contacted me a few months ago. She and I had become friends at an organization where she worked and where I “cut my volunteer teeth.” We became close, but then as I got busy with a job that took me traveling around the world, and she changed jobs so I didn’t see her at the place where I had been volunteering, we drifted apart.

That’s how things go in life — you meet people, form a bond, have fun, but then as life changes, you promise to keep in touch but, alas, sometimes that doesn’t happen. Of course it’s easier today with email, but still you have to put effort into it.

She lives about 90 miles (145km) East of me, on the other side of Maryland’s Chesapeake Bay Bridge. This bridge is huge — when the first two-lane bridge opened in 1952, it was the world’s longest steel structure at 4.3 miles (6.9km). It still serves as the only major overwater connection between the two halves of Maryland, my home state, which is divided by the Chesapeake Bay. A second parallel bridge opened in 1973 and has three lanes.

It was kinda spooky to be riding my bike in one lane with two lanes of oncoming traffic immediately to my left on this large bridge. 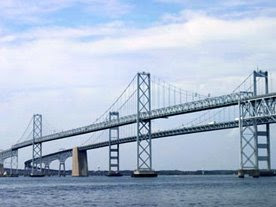 The maximum height is 186 feet (57m), which if one has a fear of heights, can be daunting. (Fortunately, as a skydiver, heights don’t really bother me — it’s the landing LOL!). As long as you look forward and where you’re going, you don’t really see that all there is below you is water.

I found my way to my friend’s business. She operates a little café in a small, rural town among corn fields and farms. She fed me lunch, we caught up about our lives, how they have changed, what we’re doing, our past dreams and current realities. I suspect we’ll be in regular communication again, as I will be doing a website for her cafe to give her business an internet presence.

A very pleasant day and a good ride. Nice weather, light traffic, warm sunshine, but most of all, the rekindling of a friendship.

Life is short: Enjoy! Oh — wear your boots! I did. (Though I can’t say the gang of retired cops I bumped into at a gas station in Stevensville were booted. It was very disheartening to see retired cops riding big motorcycles with a full-face helmet, shorts, and sneakers. Uggghhhh… just stupidity. Oh well, I don’t ride with them; it’s their skin they’ll lose when someone hits them. And of all people, they ought to know better!)