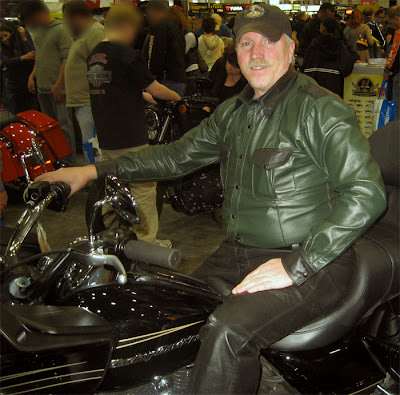 “MAL” means “Mid-Atlantic Leather,” the second-largest annual gathering of the leather clan in the U.S.  It is going on in downtown Washington, DC, and ends tonight.  I blogged the other day about why my partner and I decided not to attend.  Been there, done that….

Instead of going to MAL, I wore full leather anyway:  long-sleeved hunter green leather shirt, leather riding pants, and Wesco Boss boots.  My partner and I went to the motorcycle show that was also in town, at the Convention Center.  It was easy to get to because we could use our Metro subway system, which has a stop right there… convenient.

We strolled around, looked at the new bikes, show bikes, display bikes, and the various vendors’ booths.  While several vendors were selling leather gear (vests, jackets, and chaps), only one vendor was selling U.S.-made gear.

Most of the leather gear was cheap junk made of imported leather from Pakistan.  The lack of quality showed.  What also showed was what these vendors know about the demographic of guys who attend these shows.  I swear, some vendors only had vests and jackets that started at US Size 50 — and up!  My gosh!  But their knowledge and decision-making about what to display for sale was, sadly, spot-on.

Funny, two guys came up to me and said, “that’s a cool shirt?  Who’s selling it?” — wanting to know which vendor at the motorcycle show had it for sale.  I told both of them the truth:  they could get this leather shirt if they wanted it, but the vendor displaying it was at the Hyatt Regency, not at the convention center.  One guy said, “that’s strange” and another said, “why there?”  To both, I explained that there was a “leather convention” at the hotel, and the vendor of this shirt, Mr. S. Leather, had a display there.  Neither quite understood what I was saying, but both said, “nahhh… too far away.”  (giggle.) Also, what they didn’t need to know was that a change this year at MAL is that you have to pay $10 just to stroll around the exhibit hall if you did not buy a full admission package.

Back to the motorcycle show: I saw and spoke with some people I know, while my partner shied away and tried to fade into the background.  We strolled around, and had lunch — and I wasn’t surprised, but disappointed, that the cost of lunch was equal to the cost of two entry tickets.  Yikes!

It was a nice way to do something different and spend the afternoon with my partner.  Photos with this post show me on a 2011 Harley-Davidson Ultra Classic.  No, I am not considering getting it, or any new bike.  My 2008 Road King suits me just fine.

On the way home, I did see a couple guys decked out in full leather on their way into town.  I can imagine where they were going.  Hope they, and all attending MAL, had fun.

Life is short:  enjoy your leather while attending a non-gay-leather-dude event! 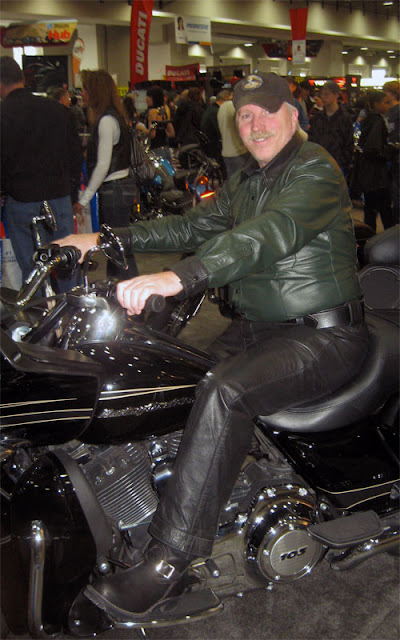