When I served as a judge at a police motorcycle competition this past September, I strolled around during the lunch break to see what various vendors were peddling.  I avoid the guns and ammo, but may stop to talk to vendors who have products such as motorcycle gear and boots. 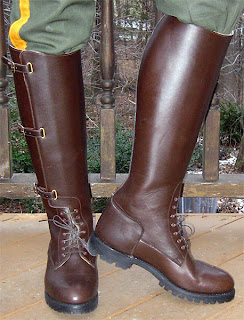 One of the vendors was a small shop purveying motorcycle gear, including Dehner boots.  I own and wear a number of pairs of Dehners, and wasn’t interested in any more… until two things happened:  I saw a very different and interesting pair of boots on display, and I got to talk to Jeff Ketzler about them.  Mr. Ketzler is the President of the Dehner Boot Company.  It’s not often you get to meet the “head guy” and talk boots.

We talked about the various materials from which Dehner boots were made, and I expressed my opinions about that “Dehcord” stuff on the shafts of patrol boots.  Mr. Ketzler wasn’t defensive, but he explained that he had heard the complaints about this plastic product melting, discoloring, and cracking, and told me that they have redesigned it so the color goes all the way through.  Okay, fine — so when it cracks (and it will) — you won’t see white cracks, but black ones.  For cops who go through a pair of boots a year, that’s fine because they dispose of the boots when they are damaged.  For people like me (not a cop) who wear Dehners and keep them longer than a year, the cracking situation isn’t so good.  But overall, it’s a balance between cost ($400/pair for the Dehcord shaft boots vs. $700+/pair for the all-leather variety.)

While European calf leather is their finest — and most expensive — Dehner boots can also be made with “Voyager” leather, which is a good grade of leather but not as expensive as European calf.

Long story short, while Mr. Ketzler was there, he measured me for custom boots.  Nothing like having the Company Big Cheese do it!  (You know the measurements will be right!)  And another good thing, there was no charge for taking the measurements, as there tends to be when you deal with them directly.  Further, I got a good discount by making a commitment to buy during the event.

Last Wednesday, the UPS guy was busy — he delivered not one but two pairs of boots to my door.  I had to wait 11 weeks for these brown beauties, but aren’t they cool? 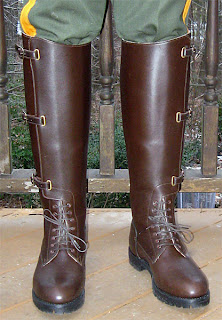 These boots are called “Dehner Field Boots” (more photos here) and I specified them as follows:  18″ tall, made entirely of brown “Voyager” leather, and a Vibram®100 big lug sole (great for motorcycling).  The other features of this boot are that they open across the front and close with three straps and buckles.  They also have a bal-laced instep which, because the boots are custom-made and fit closely, I actually have to untie so I can put them on, then tie them again to close the fitting.  (I wonder if eventually they will break in and I won’t have to untie and tie them each time I wear them. Doing that is a pain in the butt.)

I really like how these boots look, and their unique design.  I do not know anyone else who has them, so once again, I will set the example in my home crowd of having among the most unique and diverse boot collection around.  🙂