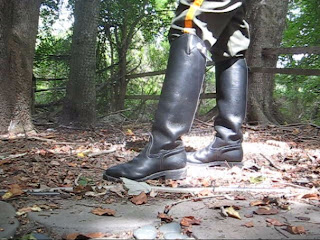 A couple weeks ago, I sent a message to subscribers of my YouTube Channel to say that I was going to have some free time during my past week’s “staycation” and asked for some suggestions for videos that I might create. 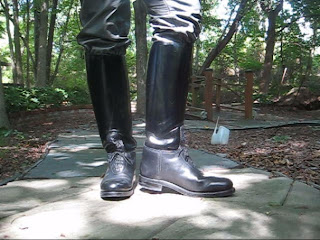 I received a few responses with rather odd video suggestions, but such suggestions were not unexpected from the boot fetish community. Sorry, fellas, you aren’t going to see me lick boots or do other things that are unhealthy. However, I received one reply from a fellow boot blogger who suggested that I keep the videos focused on the boots. He said, and I agree, “It’s All About the Boots.”

By the way, I still really like my All American Blue Knight Patrol Boots but I blogged about them recently already so I chose some others to feature today.

I put the patrol boots that I picked out for the video on my feet, showed how to keep a good shine on them, and walked around a bit. Enjoy!