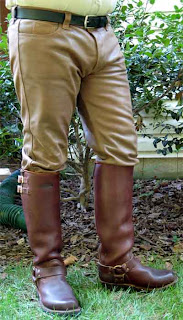 I was just reading a blog that amuses me. It is called Apostrophe Abuse. Its tag line states, “Links and visuals illustrating an orthographic pet peeve.”

I continue to be annoyed but try not to let it bug me (too much) by the number of educated adults who add an apostrophe and an “s” to make a word plural.

No joke, here is something from an email that I received the other day:

I want to thank the volunteer’s who helped out at the (event) last week. We had a great showing! Thank’s also to the RC’s who led ride’s.

I have always wanted a pair of Wesco’s. Those boots are cool. I have some questions about Wesco’s.

Worst but funniest example yet:

Its a good picture of your Wesco’s. I like it’s composition.

Okay, enough already. The plural of Wesco is Wescos. That’s it. I have many boots made by Wesco. I refer to them as “My Wescos” or “My Wesco boots”.

We will not be able to take adults back to elementary school to learn the simplest of lessons about what an apostrophe does in the English language. Primary uses are either to indicate possessive form of a word (This blog is BHD’s Musings) or a contraction, such as it’s a nice invitation but I can’t get away since I have much to write about the abuse of the written English language.

Think of it this way: if you would not write boot’s as in I like to wear boots, then you do not need an apostrophe in the phrase, those are great looking Wescos!

The examples above were written by people who were born and educated (?) in the United States (who should know better.) I am forgiving of typos, misspellings, and grammatical errors from those who write to me from other countries where English is not the primary language.

But theres no ‘scuse for Merkuns to get it so rong so offen.

Life is short: dump the apostrophes!