I attended Law Ride yesterday, which is a ride organized by the Blue Knights. They are a club composed of local chapters to which active and retired motor officers belong. Motor officers from around the country and their supporters, like me, gather in a parking lot at RFK Stadium. You hang out for a couple hours, talk to cops, and then precisely at 11am, the ride takes off. See the “take off” in the video below.

The ride rolls through downtown Washington, DC, past the U.S. Capitol, and ends at 5th and E Streets, NW, which is the location of the National Law Enforcement Officer’s Memorial. 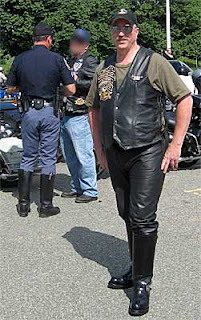 Over the next several blog posts, I will relay information I learned from conversations I had with visiting officers. The discussions were interesting, and I learned a lot.

I noticed this year that far fewer motor officers came to the event. Many thought it had something to do with the economy. City and county law enforcement departments are cutting back on activities that their motor officers can do outside the regular job.

A huge contingent came all the way from California: the county and city of Sacramento sent about 40 officers; the city of Folsom sent 7; other cities in Sacramento County also sent a few. These officers loaded their police motors onto semitrailers which were driven cross-country.

There was also a large contingent from the city of Detroit. The riders in this group included the Chief, who rides himself. Cool!

I didn’t see cops from southern states, except a few from the city of Orlando, Florida, and three from Terrebone Parish, Louisiana. In years past, I had seen officers from several Florida counties and cities, as well as other states such as North and South Carolina. Not present yesterday.

Also, I didn’t see cops from New York or Ohio — usually various cities and counties in those states have participants in Law Ride. There was one motor officer from my home county, and a few from neighboring counties. But overall, Maryland was not well represented. There was, though, the usual large contingent of dress instep Dehner-booted Fairfax County, Virginia, motor officers. They, and their boots, looked great as ever.

It was a stunningly beautiful day. The skies finally cleared after almost two weeks of rain. The sun was bright, and the temperature was about 70°F (21°C). We also had a really low dew point, so it felt dry and comfortable. It was a terrific morning.

I didn’t stay in the city after the ride was over for more than about 20 minutes. My partner has a list of “honey-do” projects that won’t quit. I got home by 1pm, and began slogging through the list. Now the lawn is mowed, concrete was mixed and scooped to fit a growing hole under our front stoop, and Mrs. “O” in the neighboring retirement community has a new, working, smoke alarm. All is good.

Check back each day for the next several days for more posts about Law Ride: the ultimate police-escorted ride in Washington, DC. Meanwhile, enjoy the video below which shows the cops leaving RFK to begin the ride.