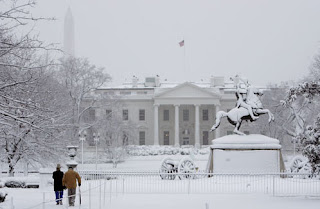 Will it rain? Will it snow? Will it be icy? Will the sun shine on MAL and the Presidential Inaugural on January 20?

I’m watching the long-range forecasts. I post an updated “MAL Weather Forecast” on my website, and try to update it daily. Weather during past MAL events has ranged from warm and sunny to wet, icy, and snowy. It really varies.

Typical of the inter-regional climate zone where we are located, tempered by the Chesapeake Bay, the Atlantic ocean, the Appalachian hills, and the terrain in general — we frequently experience all sorts of weather, and some of it at the same time. It is quite common to have snow in one place, freezing rain a few miles away, and no precipitation just around the corner. Especially during winter. Even though Kansans and Missourans like to claim that they invented the phrase, “if you don’t like the weather, wait five minutes,” that phrase is applicable in the DC Metro area, too.

My partner and I are considering going to the Hotboots party on Saturday, January 17, from 2 – 4pm at the Green Lantern. Our decision, however, will be last-minute and weather-dependent. If there is anything frozen falling from the sky or on the streets, we’re not going. My partner can’t walk on that stuff, and I don’t want to deal with it. Yeah, okay, call me a “weather wuss,” but I’d rather be safe, warm, and happy instead of cold and wet, and have my partner risk slipping on an icy sidewalk while walking from the Metro station to the bar.

Should the weather be decent, then we will be guided by news reports about crowds. It is very hard to discern between media hype and reality. Though in the nature of my job, I am aware of some of the reality for inaugural event planning; nonetheless, the crowd estimates at any given time of day and on the weekend leading up to the inaugural ceremony are a crap-shoot. Nobody really knows how many people will be in DC during that time until they actually materialize. (Hmmm, now that sounds like Scotty is beaming them over using the Transporter, or that they’re coming from Mars. Well, could be, could be…. Most locals with a lick-o-sense are staying home on Inauguration Day and away from the city for the whole weekend, leaving the crowd-fending to the visitors.)

IF we go to the Hotboots party, that’s the only MAL-related event that we will attend that weekend. We’re kinda “over” attending fetish events, about which I have blogged in the past. Been there, done that, got the t-shirts, the boots shined, and suffered the rants of enough closeted once-a-year leather fetish queens to last a lifetime.

Meanwhile, if you are planning to attend MAL this year, Read my forecast. It may help you in planning, knowing that MAL is right before the Inaugural, where zillions of gape-jawed visitors will be descending on the city. It will be amusing to watch the leather dudes interact with the throngs of other tourists, but that’s for another blog post later.