A while back, someone wrote to me to ask my advice on how to remove a strong smell of fragrance from a pair of boots she bought via eBay. Another guy wrote recently with a similar question — how to remove smoke odor from a leather jacket previously worn by a heavy smoker.

There are a lot of home remedies and folklore out there. In my opinion and based on experience, most of the home remedies do not work. Here is what works, and why….

Odors from fragrances or smoke are actually molecules that are released into the air. A concentration of these molecules is picked up by the human nose and detected as a particular smell. There are smells of all kinds, from pleasant to unpleasant. Some people find some odors pleasing or arousing while others find the same odor obnoxious (for example, some guys like to wear aftershave or cologne while other guys can’t stand the smell, myself being one of them).

First, if the odor is very strong, it means that many of the molecules that compose the offending smell are being released from the material to which they were applied. Leather, in particular, is known to hold on to these molecules for a long time and release them slowly — so it seems to the person owning the leather item (boots, jacket, vest, etc.) that the odor persists for days, weeks, or months. 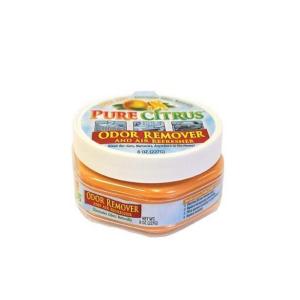 If you are dealing with that situation — a saturated garment or pair of boots — then the best way to remove the odor (or at least reduce it significantly) is to get a small can of gel odor remover (picture, left) from any building supplies retailer or large variety store like KMart (or Wal-sucks).

Remove the top of the lid of the gel odor remover and place it into the bottom of a plastic trash bag. Then place the garment or boots in the bag, too. If you are placing a leather garment into it, make sure that all of the garment’s openings are open — that is, zippers unzipped, buttons unbuttoned, snaps unsnapped, lining removed if removable, and pockets turned inside out. Make sure the leather does not touch any part of the gel in the can of odor remover.

Close the bag tightly. A twist-tie will work well to seal it. Leave the bag in an area out of direct sunlight and out of the way for two or three days.

You may find this gel odor remover sold with various smell blends as a replacement — orange, lemon, or linen. Most people do not consider these alternate smell blends to be as offensive. And after treatment, those odors will not be as strong. However, if you really want to get rid of all odors — offensive, citrus, or otherwise, then perform one last step.

After the garment or boots have been in the bag with the gel odor remover for two or three days, then open the bag and remove and dispose of the gel odor remover. Put an open box of regular household baking soda in the bag, and close the bag again. Let it sit for another three days. When you remove the garment or boot, it should be fragrance- and odor-free. It also helps to hang the garment in an open area after treatment and let it air out — preferably outdoors if possible.

I mentioned above that there are a lot of recommendations based on folklore to remove odors from garments. Baking soda works if the odors are not pervasive, very strong, or have had time to penetrate the fibers of leather. That’s why it works to remove the light citrus odor from the gel odor remover, because the exposure was minimal. But baking soda will not remove strong smells of a fragrance, such as overspray of perfume, a spill of cologne, or heavy tobacco smoke. The treatment of confinement to a bag with a gel odor remover for several days works much better.

What does not work? Spray-on chemicals, such as “Febreeze,” actually introduces fragrances which you smell more than the offending odor. These treatments do not remove odor, but cover it up or provide a substitute odor — which to some people is equally as offensive. Also, rubbing a leather garment with a cloth soaked in chlorine bleach is unwise. The bleach may stain or damage the leather — and all that does is add another offensive odor — chlorine.

I hope this helps.

Life is short: leather should smell like leather, not something else.