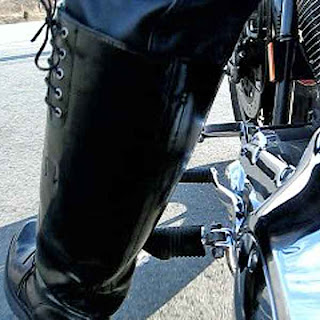 Today began like any regular work day. As I was getting dressed, I knew that I would be riding my Harley to the Metro to get to work, then when I got back to the Metro, I will be riding across the county to get some things for an elderly friend who doesn’t drive and drop them off on my way home from work.

Considering that I would be on my bike for a while after work, thus wanting to wear motorcycle boots (instead of cowboy boots which I usually wear to the office), I selected my H-D Police Enforcer Boots. While dressing, I tucked my dress pants into them. I can just pull ’em out when I get on the train. The boots look like well-polished dress shoes peeking out from under dress pants, and they are really comfortable!

I made my man his lunch, as well as my own, kissed him goodbye as he left, and soon thereafter, I mounted my trusty iron steed and rode off.

I wasn’t a mile down the road when I noticed a bike cop following me. He was just riding behind me. No signals, no lights, no motion to move. I wasn’t exceeding the posted speed limit. I thought he was just returning to his district station which isn’t far from the Metro station that I use.

When I turned the corner onto the street to get to the Metro parking lot, the cop made the same turn. I thought to myself, “hmmmmm.”

Then when I turned into the Metro parking lot and rode up to the special parking spaces designated for motorcycles… the cop rode up right behind me.

I had nothing to feel guilty about, but you know that feeling… when a cop follows you and then stops behind you, you can’t help but wonder what you did that prompted him to stop.

I killed my bike’s engine and dismounted. I took off my full-face helmet and turned around. The cop had a big grin on his face. The first words out of his mouth were, “it IS you!”

Now, what did he mean by that? Has he seen my alter-ego website? Have I met him somewhere or at a community meeting? Had I raised funds for a cop charity with which he was involved? Was he the cop who provided security at a recent public hearing that I presided over? I’m really bad with faces and names, but never boots. Trouble was, his Dehner Dress Instep Patrol boots were as undistinguishable as all the others on our county’s force… dirty, dusty, and well-worn. And I didn’t remember his name when I read his name plate.

If he had parked his bike so I could see his license plate, I might have known where I may have seen him. I know most of the county cops by their plate numbers. Well, anyway, the big smile radiating from his face and his hand thrust out to shake mine certainly shook off any fears that I had done anything wrong.

All he said was, “you’re the guy that Officer (name) told me about, who knows about boots.” He said that not only my boots tipped him off, but also my vest, which had recognizable patches on it.

Then he launched into a long discourse about his boots, what he doesn’t like about them (how hard they are to maintain, and that they get hot), and what he prefers as far as height and sole. He said that he really likes lug soles, such as were on his Dehners (see? He actually lifted his boot to show me.) He went on to say that he absolutely doesn’t want boots that have to be shined all the time. But he likes to have a good appearance.

He complimented my tall, black and shiny boots, and asked me where I got them. Unfortunately, they’re not available any more (but my deviant mind was saying, “Officer, Sir, I have a second pair that might fit you”). I recomposed myself, returned the handshake, smiled back, and then had a brief discussion about boots with this nice (but very chatty) cop.

Eventually he asked me about my recommendation on boots, and I told him what I had learned during my bike cop boot advising experience with another local force. I recommended he consider Chippewa Hi-Shine Engineer Boots and to have lug soles put on them at my local cobbler, who provides a significant discount to cops.

He thanked me profusely. By then, I had locked my bike up six ways from Sunday and was in the process of covering it. He helped me do that. He then wished me a nice day, and rode off. He left a huge smile on this Bootman’s face! Wow. Nice to be recognized for some expertise by someone who must wear boots for his profession.