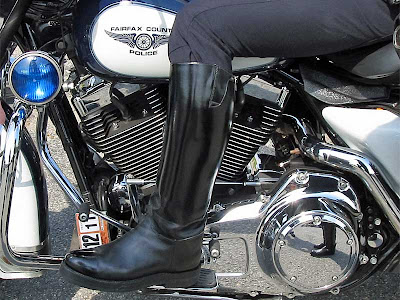 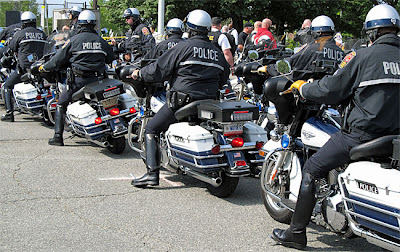 I finally had some time to crop and assemble three galleries of photos that I took on the annual Law Ride held May 8, 2011, in Washington, DC. The galleries are at this link (officers, boots, and prides of boots).

I posted a link to these photo galleries on the Hotboots website yesterday morning, and I wasn’t surprised that hundreds of people visited the galleries from the link on the BOL board. The traffic to my website spiked almost instantly, although very few people made a comment. That’s typical, and not surprising at all.

I noted from visitor logs that a bike cop who writes a very interesting blog was among the visitors to this gallery from that Hotboots/BOL link. I didn’t know that he was a Bootman 🙂 He is a cool, relaxed, and understanding guy — the impression that I have from dialogues that I have had with him via email.

Not as many officers attended Law Ride this year as in past years, but that’s because most of the events for National Police Week begin later in the week, so officers from distant locations can’t justify the cost of spending an entire week during expensive tourist season in the DC area.

The vast majority of motor officers who attended were from jurisdictions in the DC area; however, there were a few from more distant locations (Mississippi and San Diego, California.)

The local motorcops from nearby jurisdictions wear dress instep Dehner boots, and some have double soles applied. Four officers from Mississippi wore Chippewa Hi-Shine engineer boots. Interestingly, I didn’t see one pair of bal-laced motorboots on the cops — only on my non-cop feet. Hmmm… I may have to do something about that! LOL! It is an interesting and fun ride, where when we arrive at the destination of the ride, the Law Enforcement Officer’s Memorial, we pay tribute to law enforcement officers who paid the supreme sacrifice in keeping us safe: those who died in the line of duty.

Life is short: pay tribute to those who care for us. 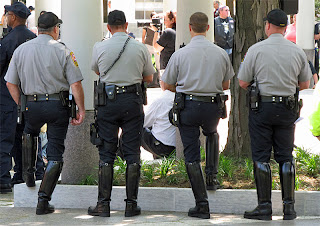