Oh rats, what a dilemma. Back in March, someone contacted me expressing interest in an old pair of Wesco Boss boots that I had on my website. While I say, “none of these boots are for sale,” I did have a note on the page about that particular pair of boots that they were small on me and I would entertain a bid to buy them. 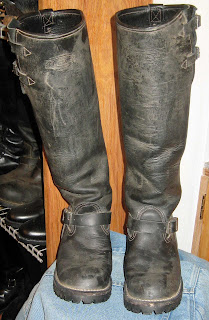 A guy from the U.K. and I exchanged several email messages, and agreed on a direct sale. He offered to pay me in two payments, splitting his payment over two paychecks. I agreed. He said that he wanted them before going to a boot party in London on 25 March. He sent me a deposit, and we agreed on the amount of the remainder to be paid the following week.

In a gesture of good heartedness, I offered to send him the boots before I went on a business trip, which would have been during the week that he would have sent the last payment. That way, he would have the boots in time for his desired date. I felt assured that everything would work out, so I shipped the boots, then went on my trip… then didn’t hear a thing.

I contacted him last week. He said that the boots were not received. I went to my post office and they showed me the tracking number (which I hadn’t noted correctly) and validated that the boots had been shipped and delivered (but only says “delivered – Great Britain”). However, the guy to whom I shipped the boots said that he never received them.

I don’t know exactly what’s going on here. I accept the buyer’s word that he hunted for the boots but couldn’t find them. He’s blaming our U.S. postal system for not having a record of their exact delivery — other than “delivered Great Britain” on (date.)

I’m not out of money, directly. That is, I received a deposit which adequately covered the expensive shipping charge.

This whole fiasco has completely soured me from entertaining any thought of selling any more boots to anyone outside the U.S. or Canada. I am not saying that I will never do that again; however, I will insist that the buyer pre-pay all of the money, and also pay for a higher-cost but assured delivery process, such as by FedEx which has a much better process of assuring delivery and getting a signature of the recipient than the U.S. Postal Service.

By the way, if you are in London and see anyone wearing these boots, ask him where he got them.  More photos of these boots are here. Seriously, if you see someone wearing them, let me know. Be assured, I will keep your confidence. I just want to find out what’s going on.

Life is short: learn from your experience.