It is regretful that this series continues about certain styles or brands of boots and questions entered into search engines asking if those boots are “gay,” but here is the third internet search — found on the same day as the one about harness boots and engineer boots being “gay”:

Again, I remind readers that kids today have adopted the term “that’s gay” to refer to something that is, in their opinion, lame or dumb.

Once more, being concerned about what other people say about what you wear on your feet is a sign of youthful immaturity. Eventually, these guys will grow up and learn that what other people think about what they wear is immaterial. When they become a man in their own right, they can choose to wear Frye boots if they wish. 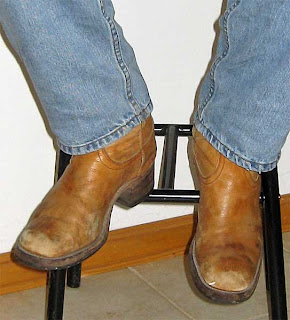 I do have to say, though, that the Campus Boot style of Fryes is universal in design, and is worn by women — that style of an unadorned foot (no straps or buckles) with a higher heel (2″ to 2-1/2″) is considered by some people to be more of a women’s boot than a man’s.

But read my recent (straight) guest blogs, “Frye-ography” and “Observations From a Frye Boot Fan” to consider that to guys in the 60s and 70s, Fryes were the style of boot to have and to wear — different from cowboy boots, which were not as acceptable and prevalent on the U.S. East Coast, or combat boots, which reflected something that draft-eligible men were concerned about.

To some of us “more mature” men, Frye boots bring many fond memories of our turbulent youth in the 60s and 70s and we’re man enough to wear them today.