Search engines, Bing this time, never cease to bring me amusement.  Someone from Mineola, Texas, (about 80 miles east of Dallas) searched:

I will not repeat myself (too much) from what I wrote yesterday.  I have learned that kids today use the word “gay” as a synonym for “lame.”  The concern expressed, if someone is searching for it, is to know the opinions of other people about engineer boots. 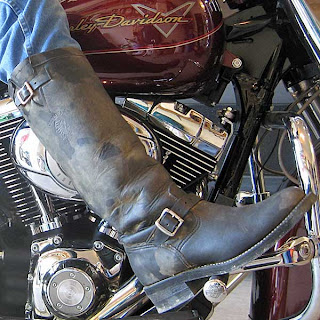 I have to say that engineer boots are among the most masculine in appearance and design.  Their design dates back over 150 years, to the days when trains were running into new territories in the westward expansion of the United States.  With a bold, rounded toe, single strap and buckle across the instep, the boots make a firm statement.  In my opinion, the statement is that the man wearing them doesn’t put up with anyone’s bullsh*t.  Most guys who are man enough to wear engineer boots — be it to have on while riding a motorcycle or just knockin’ about the neighborhood casually — are strong and confident.