A note from BHD: the following guest blog post was written by a friend who rides a Harley and lives in Vermont. He’s a straight guy, quite witty, and has opinions that are similar to my own. I thought some of his recent email messages were interesting. With his permission, I am posting his comments below.

Photos are of me, to illustrate the point, not of my friend. 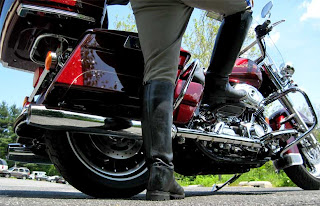 Everything old is new again. You are just a trend setter. You know looking good is not just a, for lack of a better phrase “a gay thing”. I think there may be a perception from some people that wearing boots is just for gay men and it is not.

I live in Vermont. We have had civil unions and gay mariage for so long here I don’t even think about how sometimes that in other locations that this kind of bigotry still exists. As long as you are not wearing your chaps with the crotch exposed with boots on your bike on the highway, then screw ’em. 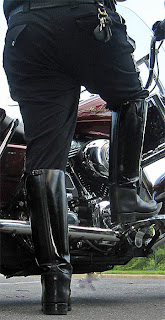 Everything is retro. You know part of the the Harley experience is being an individual. Everyone’s bike is differrent. Each is customized to what the owner wants and every one wears what they want to in order to express themselves in the way they want. That is why you ride a Harley. Next time someone busts your balls about the boots, tell them if they keep it up, you will kiss them, I doubt they will say anything to you again. Include some photos of you in your boots in a biker newsletter. Maybe some other guys will ask you where to get some boots. Tell them that the women love them.

—————————
… and from another message about wearing boots and breeches on a Harley, my friend said:

I am the only one around here to wear boots and breeches. My girlfriend has a pair of boots and breeches too. During the forties and fifties most everyone riding a motorcycle wore boots and breeches. As I said I do not wear them in the summer as it is just too hot so I switch to jeans but do wear the poly breeches if it is not too hot. I have to tell you, I really do not give a darn what people think. 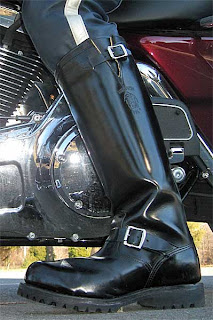 I do receive a lot of compliments from women about the boots. They love them and I love women, so it kind of works out. Just again the other day we had taken a ride and were walking around a country store. A woman came up to me and said, “I love your boots.” I don’t wear breeches with a stripe as I don’t want to be confused with being an on-duty cop. If it was me and some one made a disparaging comment about my boots, I would tell them that I would just stick them up their ass to find out how they feel. Or you could just tell them to go f*ck themselves.

I would not get too self-conscious about it. Both Harley and Davidson wore breeches when they rode. Just look at some older photos and any old issue of a Harley magazine, and it is filled with riders wearing boots and breeches. They must have been on to something.

1 thought on “Boots and Breeches: Looking Good on a Motorcycle”