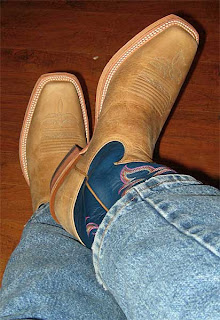 Not that long ago, someone sent me an email and said, “I have been reading your blog and website, and you say all the time that you only wear boots. Is it true that you don’t own even one pair of shoes, like trainers?” He was from the U.K., where “trainers” means “sneakers” here in the U.S.

I replied with a simple but honest answer, “yes, that is true. Boots are my footwear. I do not own any shoes of any sort, and have no intention of having any.”

He replied the next day saying, “I find that unbelievable. You say that you work in a management position in an office. You lead some sort of organisation in your community. You gave a eulogy recently at a funeral. You must wear shoes on those occasions!” 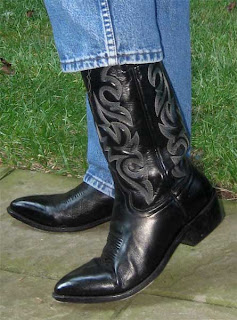 My reply was factual: “I have been wearing boots as my exclusive choice of footwear since I was at least ten years old, and probably before that. Because everyone who knows me — at the office, in the community, and everywhere else — has only seen me in boots, they expect nothing else. Granted, I ride a motorcycle and have a reason to wear solid, protective boots for safety’s sake. But boots are on my feet at all times (when I am awake, healthy, and physically able to walk), not just when I’m on my motorbike. For more formal occasions, I wear dark (black or black cherry) cowboy boots with a normal heel and semi-rounded toe. I do not ‘overdo it’ by wearing boots made of exotic skins or colours or that have high heels or sharp ‘X’ toes with a suit or in a formal setting. Wearing boots is just who I am and how I have always dressed.”

My correspondent replied with a different line of questioning, “so what do you wear to the gym?”

… well, that presumes that I go to a gym. I replied by saying, “I use the swimming facilities at a University near me, and can walk barefooted between the locker room and the pool. I do not engage in physical activity there that requires use of sneakers. While I enjoy walking a lot, I have boots that are quite comfortable for walking as exercise.”

The guy with whom I was communicating replied by saying, “thank you for your explanation about wearing boots all the time. It may be a difference of culture or experience. While I like how boots look on some men, I would never think of wearing a pair of boots except only on the most informal occasions. I would not wear them to work, or with a suit. I would expect a mature man such as you would share the same perspective. I have learned that this is not true. It is very interesting to me. Thank you.”

I thought that was a civil reply to a discussion of different perspectives. I have found this line of inquiry to be similar with some men in my own country (the U.S.) as well. There are some guys who would never think of wearing boots at all, and some who might own one pair of boots that they may wear once or twice a year on informal outings. Some men wear boots more often. I realize I am on the extreme, by wearing boots exclusively and refusing to consider, much less actually wear, shoes.

Thanks, G, for your insights and for your permission to post this message on this blog.

3 thoughts on “Boots Are My Footwear”