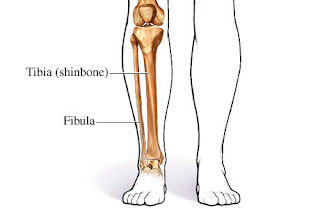 Our poor ol’ brother broke the lower end of his fibula in his right leg, near the ankle. Fortunately, the ankle is fine. Being a complex joint, breaking the ankle itself would probably mean surgical procedures and a very lengthy recovery. A broken fibula is bad, but it will heal by itself and no surgery will be required. (M saw the x-rays through incredible marvels of technology, and confirms BHD’s doctor’s observations).

He was fortunate to be wearing boots that provided strong ankle protection when he fell. Had he been wearing sneakers or regular shoes, then it is likely that he would have broken his ankle and his life would be changed forever. For us, as his brothers, we are now convinced that his boot-wearing probably saved him months if not years of pain and inconvenience.

For now, while he is uncomfortable when he is waiting for the pain and swelling to subside, he is being well-tended by his partner and the older folks I met when I visited with him over the years. From what we hear, his partner is providing the TLC that our brother requires, including help with bathing and changing clothes.

Our brother’s older friends are taking shifts to spend time with him during the week while his partner is at work. Our brother told us both in a rather emotional moment on a recent phone chat that “paying it forward is being paid back.” That is, he has put a lot of time and attention into caring for his senior friends, and now they are enjoying being needed, and helping him.

All of us who love him have told him only to say, “thank you” and not say that he is undeserving. If anyone deserves kind, caring attention, it is our brother (“big” to J, “gentle” to M).

He worries that all of the people he cares for will need help that he can’t provide during his recovery period. So from afar, we are helping to organize an in-fill capacity to provide his services while he recovers. Our sister will begin to look after our aunt, and a couple nephews will do what is required to care for some of his senior friends who need physical help that our brother, until now, has provided without fanfare or attention. That’s just how he is.

Believe me, accepting the role of being helped is not easy for the helper our brother is. Our role, living so far away but being close to him as brothers, is to help him accept that, and to know what he says all the time is true–

2 thoughts on “When the Helper Needs Help”