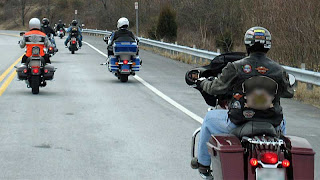 Each ride is led by a person who fills a position titled “road captain.” In serious, safety-oriented motorcycle clubs, the road captain will plan a route for a ride well in advance, including pre-riding the route to note any potential road hazards, difficult turns, narrow roads, etc.

The club will announce the ride in advance, so others can see that it is coming up and decide if he/she wants to go. But in all honesty, most people make the “go-no-go” decision on the morning of the ride, since (obviously) motorcycle riding is a weather-dependent activity. One does not have to register in advance — riders just show up. The number of riders can vary from a handful to over 50, depending on a number of variables (weather, competing choices, duty to family and home, etc.)

One club with which I once rode announces rides via email only one or two days before a ride. Due to the poor announcement timing, I have not been able to ride with them in years. (That group operates on “gay time.” If you don’t know what that means, don’t ask.) 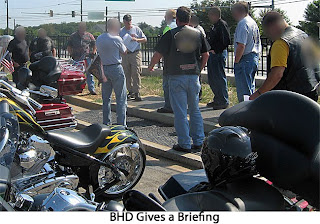 On the day of the ride, the road captain shows up at the designated location from which the ride will depart at least a half-hour early. He or she greets and welcomes all riders. At the designated start time, the road captain will gather those who have assembled and go over group riding procedures and describe the route, noting anything he/she learned about the route during the pre-ride. A well-prepared road captain will provide a “ride sheet” which details information about the ride route in writing, noting turns and distance of each leg of the trip.

The road captain often designates another road captain to be a sweep rider. This person rides in the very back of the group. His/her responsibility is to follow and stop with anyone who may have to pull over due to a mechanical difficulty, or help if there is a crash.

The leading road captain will take the front left position and assemble the group, two-by-two, behind her/him. Once everyone is assembled, the ride takes off. 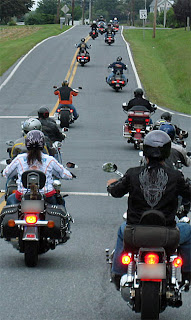 We ride at the posted speed limit in a staggered formation (not two-by-two). Not all riders have the same skills, and some feel very uncomfortable if the ride goes too fast or the group falls apart. The road captain will use hand and turn signals to pass information back to the rest of the riders about upcoming turns, stops, or road hazards such as railroad tracks, potholes, road kill, etc. He or she may stop along the way to allow the group to catch up if they got divided at a turn or stoplight.

Usually group rides are to a destination such as a restaurant. As they say, “live to ride, ride to eat” (smile.) We have an enjoyable meal together, then saddle up and make our return. Sometimes people choose to return on their own, and some ride together. The return is often by a different route, and gets back to the general area where the ride started. But by then, most people turn off and make their way home, wherever that may be.

The road captain will turn in a report to the club, noting the number of riders, and any notes about anything that may have happened on the ride.

And that’s it…. A well-organized and managed group ride will be well planned, announced well in advance, and will be able to accommodate riders of various skills and abilities. The overall theme of a group ride is to “ride and have fun,” and that’s what it’s all about.