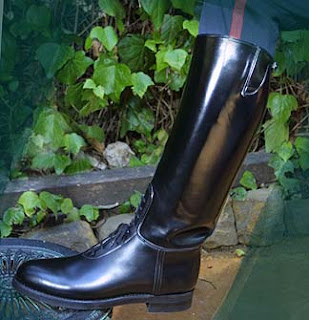 Pictured here is the classic Dehner Bal-laced Patrol Boot, from a photo on the website of a boot retailer (used with permission.)

I was speaking with Mike the other day when I placed an order for a pair of these boots for a police officer from France who is coming to Washington, DC, next week to attend a special international police conference. My visitor works in a major city in France, and wears short tactical boots on the job. He has moved up in the ranks and no longer rides a motorbike or goes on patrol, but his heart still is with the beat officers.

He told me that he has always admired the appearance of Bal-Laced Dehner Patrol Boots, and had always wanted a pair. We exchanged many email messages, half in French, half in English, and weren’t getting anywhere because my French is awful and so is his English. We discovered that we both can communicate more effectively in Italian, which is how I finally figured out what size he wanted, and what he thought about the appearance of Dehner Patrol boots.

Questi stivali hanno un aspetto di un pezzo eccellente d’arte. Posso scegliere di mostrarli nella mia casa piuttosto che li porti sui miei piedi.
These boots have an appearance of a fine piece of art. I may choose to display them in my home rather than wear them on my feet. 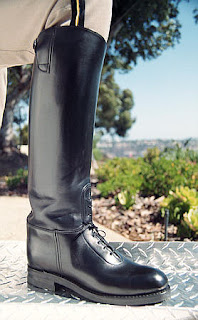 He told me that he has also seen this photo (to the left) that has been circulated on the Internet for years. It’s original source is from the Big Black Boots website. He said that he had the image reproduced and enlarged and is hung on a wall in his home. However, the quality of the photo is bad since it pixellated when it was enlarged.

Actually, that is how he began to communicate with me. He saw images on my website of my Dehner Boot Collection and asked in a very nice way if he could have a higher resolution version of two of the photos from my website. Usually I delete the original hi-res images from my hard drive, else I chew up memory. However, I had one of the original photos that he requested, and I sent it to him. He said that he had the image printed in a large format (0.5m x 0.8m) and is hung on a wall in his home. Wow — I never really thought that some of my boot photos would be admired so much as to have a cop from France want to hang it on his wall.

I look forward to presenting my new-found friend his new Dehners next week. Despite having plastic shafts, the boots really do look beautiful. I will be interested in meeting him, and learning more about his work and outlook on life. It’s funny how boots bring people together, and when they find out that they have much to talk about in addition to a mutual interest in boots.

Life is short: appreciate how boots can be art!