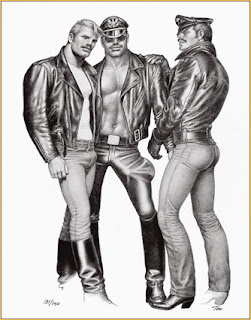 The Leather Brotherhood is the name of this drawing by Touko Laaksonen, the famous artist who was better known as “Tom of Finland.” This print was released in 1980, and soon enough it was appearing, well… everywhere.

The timing of the release of this print was co-incidental with my return from a year’s education in Europe. I was coming to terms with being gay, or at least acknowledging that I liked men and wasn’t interested in women for sex.

The strong, booted, leather-clad masculine image struck me. The guy on the right in the Muir Cap, leather jacket, tight jeans, and cowboy boots and the way he is interacting with the other guys in tall patrol boots captivated me. I found a large print of this image, and put it up on a wall in my bedroom. I would stare it it for what seemed like hours. The whole masculine, booted leatherman image was both a fantasy and a dream of what I wanted to become. At least in my male image.

I may not have the body or physique, but I have the boots, leather, and gear. These guys portrayed an image that had always captured my attention, and influenced me in my choices of gear and even behavior, in a way.

Have other guys been so influenced?