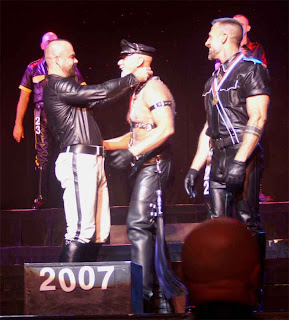 I think I can say now that when I wear leather, it is for functional purposes only, not as fetish wear. The last fetish leather event that my partner and I attended was IML in 2007, and to tell you the truth, both of us didn’t have a good time. When Mid-Atlantic Leather (MAL) weekend followed in January, 2008, we just didn’t want to go. When the ASGRA rodeo was held in September, just up the road from where we live, we just decided that we had been there enough, and didn’t want to go.

I knew it would happen, sooner or later. I’ve just grown beyond leather fetishism. (I have blogged about that before). As I have settled into a permanent, monogamous, relationship, and as some things have changed in our lives that make it less desirable or even interesting to go to leather fetish bars or events, I have arrived at the conclusion that it’s time to go through my leather gear and cull out the stuff I won’t be using any more.

I will keep most of my leather coats, jackets, jeans, pants, and breeches, which I continue to wear while riding my Harley or just “around”. I like how they feel and look. I will also keep certain leather shirts and vests for the same reasons. But other than that, the rest of the stuff will be moving along, over time. 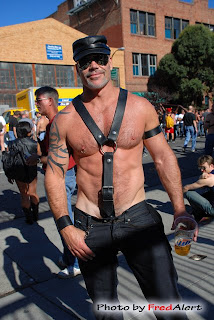 These types of things happen when one gets older, settles down, never goes out to dinner or to attend social gatherings, and is “married” to a guy who doesn’t like to be around other people. Further, in scanning the pictures from the recent Folsom Street Fair, I realize now more than ever, I’m really not into that scene. Seriously, I have just grown beyond it. I don’t think it is wrong. I do not think poorly of the guys who attend those events. I am very glad they have fun when they go. Those events, and the fetish wear that goes with it, just are not for me any more.

This is a fairly monumental decision in my life, but not unexpected. It was like when I gave my cherished Tonka toy trucks to a nephew when I was 13… I still liked them, but had grown beyond them. I have “grown beyond” (in age and interests) leather fetishism, but not leather functionality. That is, if the gear works for my continued passion in motorcycling, then I’ll keep it.

My visits to IML, MAL, and the Folsom Street Fair will be on-line. That’s okay with me, and my partner. I’m curious if this type of thinking has occurred with other monogamous couples as they have aged and settled down. If this has happened to you, leave a comment.