This is a guest blog post written by a man with whom I have been exchanging email for a while. He has written to me about some of the posts on this blog which he told me have been both informative and some have been amusing (like my “amusing google search” posts that appear from time to time.) He’s a teacher and enjoys wearing boots, but in a U.S. state where few men wear cowboy boots on a regular basis. The photos with this post are pictures of some of the boots in his personal collection. Here’s his story.

By: The Only Booted Man in Town

I am a nonconformist by nature. I hate doing what other people do, and despise doing things because they are trendy. Maybe that’s part of why I wear cowboy boots in a part of the country where most guys don’t.

But there’s more to it than that. Let me get on the leather couch for a minute and relax, and let my mind wander to the past. Ahh, there we go.

Here is my bootman story.

When I was in high school, cowboy boots were cool for guys. We were just coming off the “Urban Cowboy” thing, and boots were all over the place. Except on my feet.

I was a nerd by nature, and not well-respected by my peers. I was shy as well, which didn’t help things. Yet I lusted after a pair of boots. Don’t know why. Just really liked them. Finally right before Christmas, my mom and I were in the mall browsing around. We passed a display of cowboy boots in one of the stores. Looking at them, I thought, “Man. Do I actually ask for a pair?” I did. That Christmas morning I found a pair of new boots under the tree. I was in love. I put them on and wouldn’t take them off. Now as I look back, I think, man, those things were terrible. They were made by Fortina in Brazil, tan, with buck stitching on the side. They had two-inch stacked heels, and really were not that great to walk in, but I loved them nonetheless. I wore and wore those things. I still have them and occasionally still do wear them. Did I become the most popular guy in school? No. But girls still did notice them, which is more than what had happened to me before. I kind of liked being a couple of inches taller (once I learned how to walk in them.) 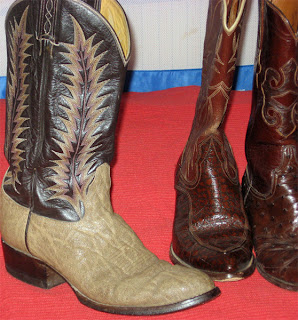 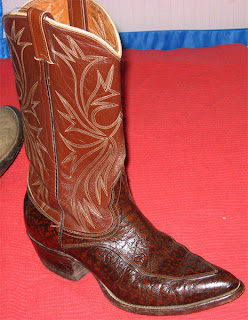 Then, out of the blue, one day, I put them on. And fell in love all over again. I was that couple of inches taller, walked a little prouder, felt a little more manly. Hmmm…. I wonder if there are any cowboy boots on ebay. Let me look here for a minute.

Alakazam. Boot Acquisition Disorder (BAD) hit really hard. Before I knew it, I owned over 35 pairs. Yes, a modest collection by bootman standards, but a lot for me. I have more shoes than my wife! I wore them every day at home and around town. At first I was self-conscious. Too gay, I thought. Too manly. Too whatever. I googled “are cowboy boots gay” and ended up a BHD’s website (yes, BHD, I was one of “those guys” with the weird google questions). Slowly, but surely, I stopped being so self-conscious about them and wore them in different places, like the junior high school where I work. That took a lot of guts. At first there were a few comments, some by kids, some by male teachers, but they have stopped. (Where’s your horse, pardner?) Now boots are a bit of a trademark with me. 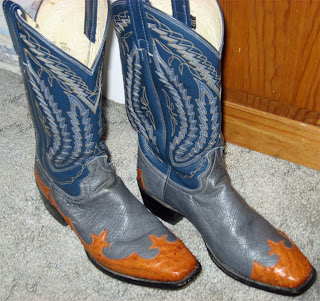 That’s the story. But why? Why do I wear cowboy boots here in the North country where we are thousands of miles away from the South and the West?

Part of it is that they are masculine. I am a quiet man by nature, and definitely not a jock. Can’t throw a football worth a damn. I’d rather work with textiles than power tools. Never even learned to ride a bike. But I love to ride horses. English, though. Not Western. Go figure. 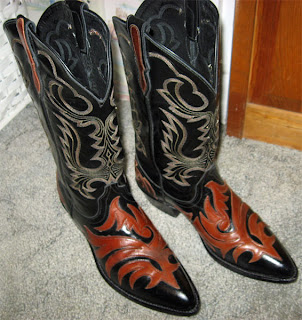 Part of it is the fact that not everybody else around here wears them. I kid that I am the only booted man in town. And for the most part I am. I am also only one of two men in town with a handlebar mustache. But who cares?

Most of all, I wear them because I am me.

So there, in a nutshell, is why I wear cowboy boots.

3 thoughts on “A Booted Man in an Unbooted State”