I have had a form of my Bootedman.com website since late 2004, migrated it to its own server and domain in early 2006, and have been adding to it and maintaining it ever since. It’s a great hobby, as it keeps me challenged with new things to learn.

As the site has been growing, changing, and advancing with technology, I decided that the old tables from the HTML from long ago had to go, as today’s website technology uses cascading style sheets (CSS) and Hypertext Preprocessor (PHP) rather than straight-old HTML with code that was built for the earliest versions of web browsers.

I also had some comments that my home page appeared very “busy” with so many image icons leading to interior pages. Some users complained that the icons wouldn’t load, or would cause the site to bog down and stop when viewed.

I also have had other users tell me that they liked its simplicity, so they cautioned making it too fancy with lots of “bells and whistles.” The good thing about CSS and PHP is that it keeps a lot of the messy code away from view, and makes pages load faster and look cleaner. PHP also allows for added security to ward off potential hackers, as well as blocking bozos (you know, the brainless dolts who link to my website from forums where they post inane comments.)

This website redesign process has been ongoing for months. I learned these skills on my own. I really should have taken a class, but I challenged myself to learn how to do it “the hard way.” Sorta analogous learning how to do long division before using a calculator.

I hope you like it. Let me know what you think. 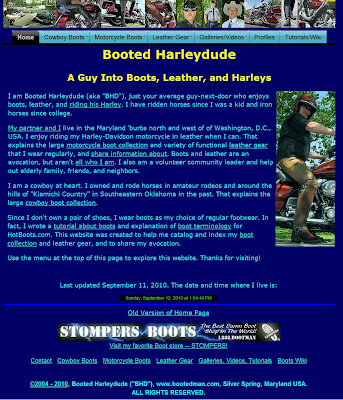