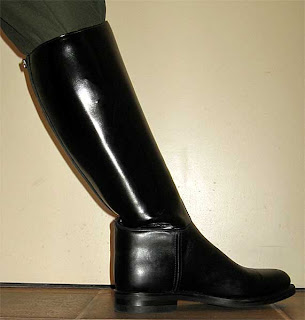 I am delighted to have a motor officer rent a house that I own. It provides him a home in which to live in the county where he works, and gives me a very reliable, trustworthy tenant.

The officer wears patrol boots every day. He has been wearing Dehner bal-laced boots, but told me recently that he has had his eye on the style with the dress instep (no laces). I have both bal-laced and dress instep styles of Dehner Patrol Boots, and we have “talked boots” on occasion. He’s not due for a replacement pair of boots for about another year, but he said that he has needed a new pair because his current boots have “broken badly” at the ankle. He experienced the crease at the back of the boot turning at an angle, thus causing a nuisance and uncomfortable rubbing across the back of his ankles. Yep, it happened in both boots.

Unfortunately, those boots are broken in and can’t be “re-trained.” The ankle break is where it is and nothing will change it. But I’ve come up with a solution.

This cop is such an honest guy, he told me that he thought that he broke the dishwasher and paid to replace it himself. He only told me that he did it after-the-fact. He would not let me reimburse him.

So…. working with my friend and Owner of Stompers Boots, Mike, I bought my tenant a new pair of dress instep Dehner Patrol Boots which I will give to him since he won’t let me pay him for the dishwasher. And to make sure that he doesn’t experience the same problem with a bad ankle break, I applied what I learned from Ron Belanger of Big Black Boots. I broke these boots in for my tenant — only at the ankle, and only to ensure that they creased correctly, horizontally across the back, not at an angle. The Big Black Boots website (no longer working link) explained how to do that. Photo below is what the boots look like head-on (gorgeous, huh?). I can’t wait to give them to him this weekend. I think he will be happy. And you know, a happy cop makes a great tenant! 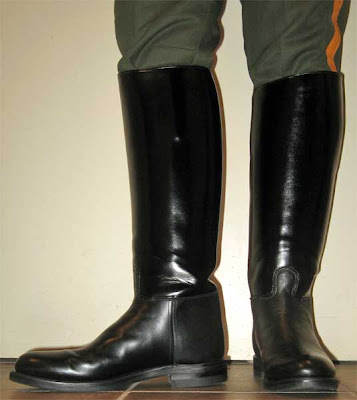