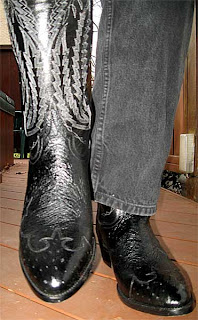 On Thanksgiving day, among our 106 guests, my partner and I enjoyed the company of a gentleman who owned and operated a western store in Oklahoma, but moved “back East” after he sold the store to live closer to his children, all of whom settled in the sprawling ‘burbs of Maryland. He lives in a retirement community where several of my family members live, and where I visit often. I met him when someone referred him to me when he needed some minor electrical repairs done.

We hit it off great — especially the first time when I walked in his door and he made remark about the boots on my feet. I remember what he said to this day: “Men wear boots!” That is a statement he has made to me each time I have seen him over the past dozen years or so.

It’s unfortunate that my friend’s children and grandchildren, all of whom live within five miles of his home, only go to see him about twice a year. They expected him to drive over to their houses for holidays, birthdays, or other family events. As he aged, he stopped driving at night, and last year, he stopped driving all together. He acknowledged that his reaction times were much slower, and he was afraid of all of the other “kooky drivers” on the road.

Unfortunately, his family’s ignorance persists. They told him that they were going this-way-or-that for Thanksgiving, and that none of them could pick him up or spend any time with him on the holiday. It’s so sad… family so nearby and so callously ignoring their own father.

We were delighted that he joined us for our holiday event. My niece picked him up (along with some others). He walked in the door with the biggest smile on his face. Surreally, the cacophony stilled. He exclaimed, “Men Wear Boots!” and handed me a box.

Inside the box was a pair of black Dan Post Vegas Cut ostrich toe cowboy boots. These are really cool-looking, dressy boots! He said that he noticed that I wore boots like those (in a different color) when I saw him earlier this year. He ordered them from his old store. He said that he thought I would like them. That’s for sure! 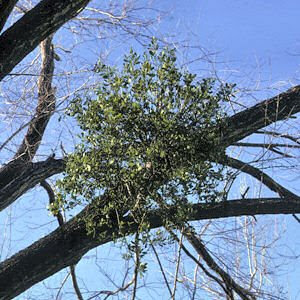 In turn, I handed my friend a box that I asked a close friend from Oklahoma to send to me. In the box was real honest-to-goodness mistletoe, which grows parasitically on trees in Oklahoma. He had mentioned that he missed his “Okie-toe,” a nick-name he has called the plant since his childhood. He told me that when his wife was alive, he would hold it over his head and chase her around with it. On Thanksgiving, he shed a tear as he removed the mistletoe from the box, held it over his head, and accepted a kiss from my niece, and a hug from me (a Christmas-time custom: anyone who is under mistletoe is to be kissed.)

There are little things that we learn about each other, build friendships, and extend bonds beyond age, race, gender, or sexual orientation. Thanks, “F”, for your gift. I can see from your eyes that you enjoyed mine.