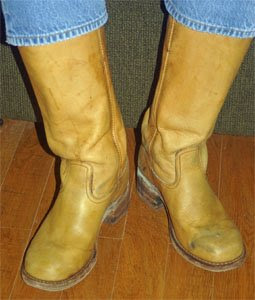 Yesterday I received a message from someone who asked me if wearing campus boots would make him “look like a gay dude.” I scratched my head about this one, and posted it on “Boots On Line” as well to request feedback.

In reviewing the replies — some of which were funny, and some showed indignation — I stepped back, put on my Fryes, and thought for a bit.

The writer obviously is confused. I commend him, though, for having the courage to ask. I thought about it for a while. Since campus boots in general share some features of women’s boots (higher heels, rounded toes, tall shafts), perhaps he is confusing that boots with those features are worn by effeminate people — and his further confusion is that gay men are effeminate.

This is the ongoing challenge with straight people who are laden with believing social stereotypes, often passed down (like folklore) from closed-minded people.

Here is what I said in response:

It’s all a matter of self-perception. Campus boots were very popular in the 1970s and 1980s, but sort of went out of style after that. Most guys who wear boots these days wear harness boots, cowboy boots, hiking boots, or work boots. But it all boils down to how secure you are with yourself.

I don’t mean this the wrong way, but if you are insecure or lack self-confidence, then you may think that wearing campus boots makes you appear a certain way to other people. Campus boots have a slightly higher heel than most average men’s boots. Their rounded toe and general appearance shares similar features with some women’s boots. Does having a rounded toe and 2″ block heel make a man wearing the boots gay? I don’t think so.

Frankly, I think you fear appearing effeminate. Not all gay guys are prissy queens, and those who act that way carry on social stereotypes that straight people gullibly believe. I certainly am not a prissy queen, and I like to wear campus boots from time to time. Don’t take this the wrong way, but you should ask yourself if you are being affected by blatant stereotypes perpetrated by some closed-minded people.

Heck with it… wear what you like and don’t give a darn about what others may say or think. That’s THEIR problem, not yours, unless you choose to make it your problem.

The choice to wear campus boots has nothing to do with being gay or straight (actually or in appearance)… it has to do with self-confidence and self-perception.

I appreciate the responses that I received on “BOL,” but I thought that trying to put myself in the other guy’s boots might give me a different perspective.

I am a confident man. I long got over worrying what other people thought about me (my boots, clothes, leather, appearance, etc., etc.) I really don’t give a flying frig what others think about those things. I wear what I like, where I like, when I like. If others have a problem with it, that’s their problem, not mine.

Thinking about wearing boots causes concern for some guys. Then what type or style of boots affects others. There are a lot if things in this world that are a hell of a lot more important than those issues. Get over it. If someone says something about the boots on your feet, just say, “thanks!” and move on.

I know, I know, I’m spoiled because I live in tolerant, open, accepting, rather liberal and forward-thinking community. I know there are many other places in the U.S. (and the world) that are much less accepting of anyone doing or saying or acting different from established norms. Each person has to live the way is best for him. I’m not saying that these other places are bad — I am saying that I wouldn’t like living in such an environment.

Okay, enough sermonizing for today. I’ve got lots of places to wear my boots today. I’ve already gotten my flu shot. All afternoon, a large band of volunteers that I have assembled will be installing 1,000 new batteries in smoke alarms in the homes of seniors. We’ve got media showing up and a big party planned for the end of the event. Wish us well!

And remember: Life is short! Wear your BOOTS!