It has been incredibly cool and pleasant after the visit by the tropical storm last weekend.  In fact, it’s been downright “coolish” in the morning and early evening. It is so pleasant to have the windows open and have fresh air circulate through the house. 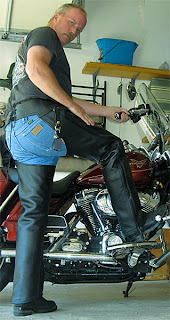 It also means that I am breaking out the leathers again. In the mornings when I saddle up on my Harley to ride to work at oh-dark-30, I have been choosing my thick “Retro Chaps” that I bought last summer. These chaps are made of heavyweight (8-9oz) drum-dyed leather. They have outside zips so the zippers won’t scratch the paint on the Harley. They are a perfect choice to wear over my regular pants that I wear to work when the temperatures are in the upper 50s (F — 14C). 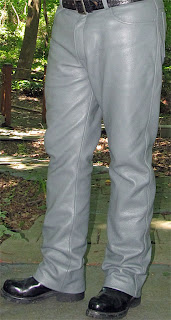 These past two evenings, I have had some meetings to attend. Yeah, things are gearing back up after a summer of inactivity with my community groups. I use my Harley to ride to the meetings, but instead of wearing chaps over jeans, I have been wearing my new grey leather jeans instead. It is warm enough that I can ride with only one layer.

Wearing leather in public — in August??? Yep — no.big.deal. Nobody says anything. Probably because they know that I ride a motorcycle when I can and also they have often seen me wearing leather jeans, shirts, and vests over many years. The leather-wearing is just what makes up one of the quirks of my personality. And nobody cares. Really. They want to know what I think and have to say, which is what is most important, anyway, rather than obsessing about what I’m wearing.

Life is short: wear leather when the temperatures support it.