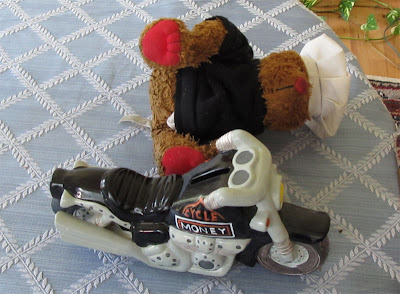 Yes, an earthquake happened yesterday. It was epicentered in Mineral, Virginia (about 90 miles south of DC), and the shaking was felt as far south as Georgia and as far north as New England. What you see in the photo above is the visible earthquake “damage” in my home — Guido was knocked off his (replica Harley) motorcycle. That’s it. No.big.deal. But from the reactions related in news stories, one would think that Armageddon happened. Oh brother….

I felt it. I was in my high-rise office building in the downtown of my hometown in Maryland. Immediately when I felt the floor shaking and then rolling (literally), I yelled, “earthquake! Drop, Cover, and Hold On!” — then dropped under my desk, grabbed the back of my head, and waited. The slow, undulating rolling of the quake lasted for about 15 seconds.

After the shaking was over, I got out from under my desk and, like most others, gathered with my colleagues to verify, “was that really an earthquake?” None of them did the “drop-cover-hold on” procedure, but none of them have experienced an actual earthquake as I have in other parts of the U.S. (California, Alaska, Hawaii) and the world (Italy, Japan, Turkey).

Then to both my bemusement and dismay, the fire alarm went off and we were all told to evacuate. Down the stairs we went, and gathered across the street in a parking lot. A half-hour waiting in the strong sunshine, then we were told to gather our personal belongings and go home.

I didn’t even bother to return to my building. I just walked to where my Harley was parked and joined the long queue to leave the garage, then crawl home. What a nightmare — everyone was leaving at the same time. I think I was slightly ahead of the curve, and was on the road home before the majority of others. Most everyone in DC was evacuated and sent home, so traffic gridlocked for hours. Thank goodness my partner was at home instead of at his office in downtown DC. He did as I have instructed and as we practiced. He dropped, covered, and held on, too.

What a friggin’ disaster. People should have stayed put and waited to leave in a staged, orderly manner. Trouble is, security types in DC are conditioned and trained in their responses to expect that when buildings shake, it’s due to something like an airplane or vehicle crashing into it — shades of memories (and subsequent over-reaction training) from September 11, 2001. (Please don’t call it “9/11”. Thanks.) So everyone was evacuated and told to leave. Not the right response to an earthquake, but their heart was in the right place.

It’s just crazy in DC when anything happens — even what my world-class mentor in disaster work called it, “an earthquake of no significance.”

Life is short: be calm. Drop, cover, hold on. If you can’t do that, then just stay home.