I received an email the other day from a guy who asked this question:

Any time I’m in a store or wherever and there is someone who is wearing boots you can hear him from a mile away. Clop, clop, clop. My boots don’t make much of a noise when I walk, for the most part. Are boots supposed to be noisy, or are they noisy because these guys’ boots are ill-fitting? 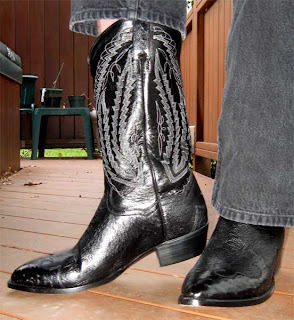 This was an interesting question to me.

In order for a boot (or a shoe for that matter) to make a clunk, the person wearing it has to drop the heel a split second before the foot. When a boot-wearer does that, he (or she) will hear a distinctive “clunk” as the heel hits the floor sooner than the foot. On the other hand, if you walk in boots as I usually do, I place my foot on the ground slightly before the heel. Walking that way, you can barely tell from the sound that I have boots on. 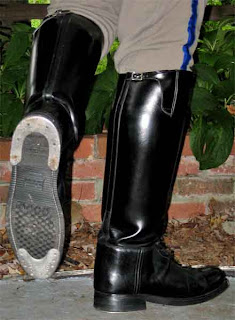 What is it about wearing boots that makes some guys want to hear that distinctive “boot clunk” sound?

My answer to the writer was one of preferences. Some guys like to hear the “boot clunk” sound, and some don’t care. There are some boots that are more prone to making a clunking sound — such as vintage Frye Boots. Also, some guys modify their boot heels by having taps added, or removing the soft rubber heel plate. Those modifications cause boots to clunk — on purpose. 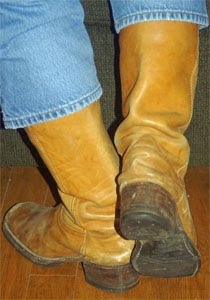 I admit, there are times when I will clunk my boots, but mostly when I am by myself and in an area with good acoustics — so I can hear the sound reverberate. I do that for self-entertainment (it doesn’t take much LOL!)

Other guys really like to hear that noise, and walk that way on purpose to attract attention.

Boots that make noise when they are worn make that noise because the person wearing the boots makes it happen. Seldom does the boot make a clunk all by itself. It needs “help.” 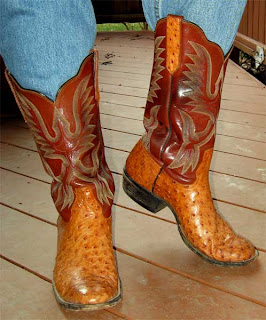 Is there anything wrong with clunking a boot, especially on a wooden floor, for example? No.

… but some people don’t like it, are annoyed by the sound, or do not understand.

We are all different. Some clunk our boots, and some do not.

Following are two YouTube videos that I did quite a while ago that demonstrates what boot clunking sounds like.

2 thoughts on “Are Boots Supposed To Be Noisy?”