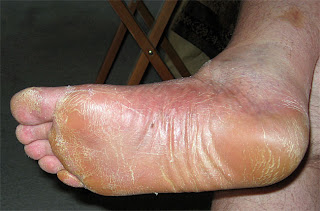 I got the cast off of my leg on Friday, and spent most of Friday afternoon removing the ugly gunk that had built up on my skin under the cast. It was great to take a bath and then a shower. You really don’t know what you’re missing when you can’t bathe by taking a shower or immersing your body in a bathtub of hot water.

After I got dressed, I tried, but was unable, to put a boot on my right leg. At first I thought the air cast that I was given was too big as I could not pull on various boots. And I tried several different styles of boots. I gave up… I was tired. I put that stupid “cast boot” back on over my injured foot/ankle and went to dinner with my family.

However, I was determined to get re-booted. Friday evening and Saturday morning, I did some stretching and flexing exercises. They really helped me regain movement in my ankle. I was able to point my injured ankle almost to the same range as its uninjured partner. I thought, “if the purpose of an air cast is to provide support and prevent the ankle from twisting, won’t a good solid boot do that?”

I called a friend who is an orthopedic specialist. While he is unfamiliar with my specific situation, he has done enough work with feet, ankles, and legs to know what I was describing. He said that I could substitute a boot for the air cast if I had to get out, but that if it got painful or the ankle swelled more, to take the boot off, put ice on it and rest.

So I pointed my injured ankle and on came my Wesco combat boots. It didn’t hurt! The good thing about lace-up boots is that they can accommodate variances in ankle sizes. My injured ankle is still a little swollen.

I laced up the boots and stood up … and walked! Woo-hoo! It actually felt better walking in those boots than walking with the stupid cast boot on my right foot and a regular boot on my left.

I proceeded to do some things that I needed to do, such as get my hair cut, attend an essential community meeting, and prepare meals for my partner and me. My beloved “St. Partner” drove me in his car, because I am not quite ready to drive myself yet. (One thing at a time.) By mid-afternoon, I was tired and sore. I took the boots off, elevated my leg, and put an ice pack on it. But man… it sure felt good to be re-booted! 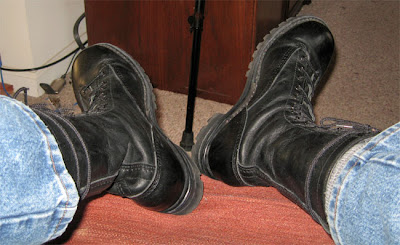