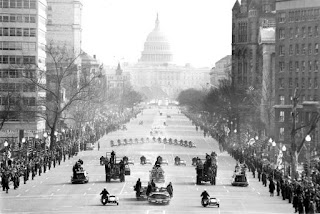 One can’t help but be moved by the peaceful transition of power as our 44th President took the oath of office.

I had a great view of the activities, but from multiple screens in a huge room where operations were being monitored. I enjoyed that, actually. I sat there, Dehner booted, with a bunch of (very young) civilian law enforcement guys and military dudes, watching events unfold. Everything remained peaceful, and all visitors — gazillions of them — were able to enjoy the events from the swearing-in of the President to the parade, as late as it got started and lasted.

Some folks on local news were complaining about how cold it was and that they thought they could endure it, but decided to turn back and go home. But about every five minutes, there was yet another teary-eyed person on the news saying that they never thought “this” could happen — the election and assumption of the Office of the President of the United States by someone who is African-American.

Those gathered where I was applauded at some major points in the President’s Inaugural speech. Some of them also applauded at Prez 43, which I could not do. I didn’t boo him (as was reported that some people observing the ceremonies did), but I sure was happy to see him go. And especially, to see that evil Deputy Prez get into a limo and be driven away.

I am pleased that as far as I could tell, our Metro system didn’t collapse, though there was one major problem when a woman fell or got pushed onto the tracks during the height of the morning travel time. Fortunately, she wasn’t injured badly and was rescued by a visiting cop. The rest of the reports indicated that the Metro functioned — so I eat my words when I predicted its failure the other day.

I am happy. I am very happy. Same is true for my partner, most of my family, friends, and neighbors, as well as most other Americans today. Let’s look forward to working together for a better tomorrow.