Men are sometimes concerned with fashion considerations, such as the color of boots to wear with certain colors of clothing, particularly for office wear.

In my opinion, such color-matching considerations do not matter when a guy is wearing denim jeans since boots and jeans go well together in any combination. However, the color-matching concerns could be an issue, albeit more of a personal one, with dress clothes.

In fact, there are a number of articles on web sites about men’s fashion and clothing that are written by strongly opinionated fashion queens. These articles are confusing to real men who are searching for information about “is it okay to wear boots to the office, and if so, how should I wear them to match my clothing?”

Regular guys who are secure in themselves and are not obsessive about fashion have found that color coordination of boots and belts does not matter that much. Some fashion websites say that the boots must match the belt, and generally go “with” the color palette of the clothes — so brown boots with tan khakis and a brown belt, black boots with a navy suit and black belt, or grey trousers with black or black cherry coloured boots and a black belt.

However, in the opinion of this regular boot-wearing office-situated professional, the articles you find on men’s fashion websites are written primarily by men who are disconnected from reality of what real men wear with boots in an office. Real guys don’t give a shit about fashion, but they don’t want to draw attention to dramatic differences in their clothing, either. Face it, most guys dress as clones. I’m here to recommend stepping out comfortably in boots, to reduce the clone-look so many men adopt. 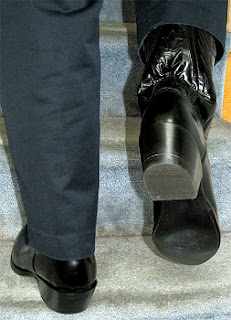 Many experts on boots recommend that a man have at least two pairs of boots. Give a pair a rest for at least a day before wearing them again. This allows boots to air out and for sweat that absorbed into the leather and footbed to evaporate. If you do that, then consider having one basic black pair of all-leather cowboy boots, and then another color, such as black cherry or brown. Save the exotic skins for a future purchase when you develop more confidence in wearing boots.

Moral of the story: the internet seems to feature much too much consideration about men’s fashion that, in the real world, is immaterial. Seriously, few people, if any, care about what’s on your feet (provided you’re not wearing flip-flops with business attire), nor if the color of your boots and belt match, or your boots match your clothes. No one in real life says anything about it.

For more information, see my article on wearing cowboy boots which remains the most visited page on my website.

Life is short: grow past self-driven fears–wear boots to the office!