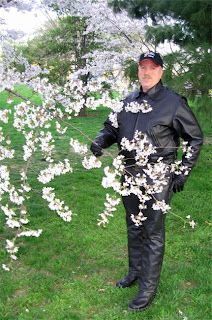 While I’m not a city boy, and generally after working all day in the city I look forward to high-tailing it out to our suburban hide-away, I still recognize that I live in a very special place in the world. There’s nothing quite like Washington DC anywhere else in the world. I’ve been to 56 countries, and have seen many beautiful locations. I still feel quite a bit of pride in how pretty Washington is, especially in the Spring. When the ornamental cherry trees bloom around the city, it’s spectacular.

Today, my partner and I got up well before dawn and drove into the city, found a place to park near my partner’s office, which is just a block from the Tidal Basin. Even though it was very early and very cold (35F), there still were a lot of people out — though I wouldn’t say that it was crowded.

I leathered up from head to boot and we took a nice stroll. I posted a gallery of photos on my website. We enjoyed our short visit, though I was back home and back to work on my long list of things to do on the weekend by 8:30. 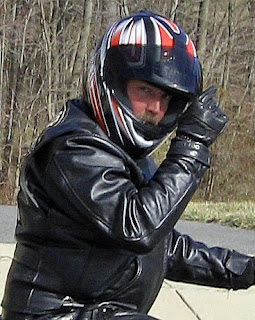 There was an article in the March 27 edition of USA Today that clearly describes that the number of deaths from motorcycle- related crashes has increased significantly since states began to repeal or not enact mandatory motorcycle helmet safety laws. The article supports my own research and that of other responsible parties.

I always wear full protective gear, beginning with a full-face DOT/Snell helmet, jacket, gloves, long pants, and tall boots when I ride. Of course when it’s 1000 degrees in the summer, I might not be able to tolerate the jacket or gloves, but I always, always wear my full-face helmet. It’s just a matter of common sense. It’s unfortunate that states have to pass laws about common sense matters, but there are a lot of people who are in denial that “it won’t happen to me,” “I am a safe rider,” and whatnot. It’s not you, it’s the other guy! Be safe out there, wear your helmet!

I just learned that four bills that I had been working on, supporting, testifying about, and otherwise cajoling, twisting arms, and persuading elected officials to support (or not support, as the case may be), have been passed by one or both houses of our state legislature. It looks very promising that full passage and signature by our governor of these important measures will be enacted this year! Pretty big “wins” for this lil’ ol’ civic activist! Four out of six, anyway.

So this year in Maryland, look for remedial tax relief for people whose homes are seized by eminent domain and who get billed for transfer and recordation taxes when they move to a new home.

Look for higher civil penalties against those who commit manslaughter by motor vehicle, such as when a car driver kills a motorcyclist.

Look for better recognition of joint owners of a real property when one adds his partner to the title to his home, and not have to pay many hundreds of dollars in transfer tax that married couples are exempt from having to pay.

Look for our state not to repeal its motorcycle helmet law.

I’m pretty happy with these “wins” that help many others live their lives in peace and with safety.

Don’t look for our state to ban driving while yapping on hand-held cell phones, and banning texting while driving. Very bad practices by thoughtless people. I’m very ashamed of the members of our state’s Environmental Matters Committee who voted against passing it, which killed it this year, despite the full State Senate approval. I’ve been workin’ this for six years, and need to continue. Bozos who yak while driving should … [expletive deleted].

I’m disappointed, but not surprised, that a bill to provide recognition for same-sex couples and equal treatment under the law did not make it past committee, much less be introduced to either house in the legislature. Much more work needs to be done here to educate the electorate and our elected officials that civil marriage is a civil right. 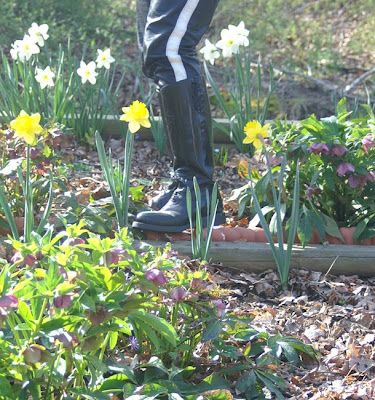 I just love to stroll in our gardens. My partner has such a great vision for landscape design. Hellebore (Lenten Rose) bloom in February and keep the flowers through May. Daffodils galore have been in bloom for a couple weeks and we anticipate having them for many more weeks to come. Both of these flowers add beauty and color to our deep, dark forest park in the back yard. And best yet, the deer don’t eat them. I’m in my Chippewa Motor Patrol Boots and my White Striped Leather Jeans. Enjoying Spring! 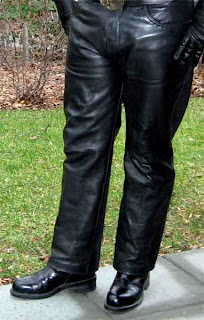 I spent much of the Easter weekend working on my friend’s political campaign. He had done a mailing that was received by many voters on Friday, which generated a ton of email which had to be processed. Requests for appearances, offers of volunteering and support, etc., all had to be forwarded to the appropriate member of the campaign team. I also had a two-hour campaign meeting. And yes, I was in leather — my Naked Leather plain black jeans and my Chippewa Hi-Shine Engineer Boots. As I have often said, nobody cares if you’re in boots and leather — it’s what you do that counts. Most everyone is so accustomed to seeing me in leather that they don’t think a thing about it.

Oh, um, I’m also working on renovating a house and did the usual grocery shopping trip with my aunt. And one other thing — I completed and posted a complete refresh of my professional website where I keep myself before the public for what I do for a living. Typical of my life — I’m a multi-tasker.

I had hoped to have time on sunny Easter Sunday to take some more pics for my website, but just didn’t have time. But I made the time to prepare a wonderful prime rib dinner with all the trimmings for my partner and me to share for our Easter dinner. It was great — and then almost put me to sleep instantly. I went to bed at 8:30 and stayed up that late only because I was still processing more email…. g’nite, zzzzzzzz.

I enjoy the Spring. Enough chill to make leather a great choice for outdoor wear, but enough warmth that you don’t have to bundle up too much.

Lately I’ve been busier than a beaver in working on a political campaign. Supporting my friend, the candidate, occupies every spare minute of my time. I’ve not had any time to do any updates of my website but hope to try to take a few pics for it this weekend.

Unlike some people, I still try to get about eight hours of sleep every night. That leaves just so much time during the day — especially considering that my full-time job takes up a lot of that daytime time!

My partner and I are not going anywhere for Easter. We will be working around our house and enjoying a quiet dinner for two at home. I look forward to preparing Prime Rib and all the trimmings. Yum. 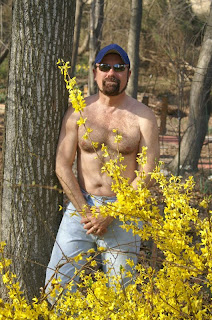 Isn’t my partner a hunk? Man, I really love it when the flowers begin to bloom in the Spring, it warms up, and my partner takes his shirt off when we work in the yard and gardens. Umm, umm, umm… take him behind that tree…. oh well, this is a G-rated blog!

We are very fortunate that we have a large old-growth forest right behind our house, and my partner has great vision for landscape design — so we created our own park. It doesn’t require much maintenance (though we have to keep on top of poison sumac else it could take over). It’s a lovely setting in which to sit peacefully and watch nature. My partner and I both get so much enjoyment out of our retreat. And watching “the help” ain’t so bad, either! Woof! 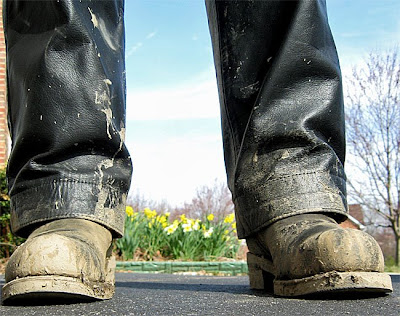 When I led the Harley group ride on Saturday as mentioned in my previous blog entry, I was wearing my new Chippewa Oil-Tanned Engineer Boots to break ’em in. And that I did. While posing the group for a photo, I stepped back so I could ensure everyone was in the frame. Then “oops…” … slurp… I stepped in it, that’s for sure. I got a big laugh, as did my biker buds. But you know, there’s something about mud and boots — the whole masculine “get dirty” thing. Oh well, I think I can say these boots are breaking in well!

I know I’ve blogged before about wearing boots with good tread when walking in slippery conditions. I didn’t follow my own advice. Yesterday, as I was leaving Minneapolis, still in my suit and while wearing good looking, but leather-soled cowboy boots, I slipped and fell. Ka-boom, right on my side.

While the air temperatures were above freezing, there still was some black ice on the parking lot in the shadow of the hotel. The black ice caught me. Uggh. My hand and side of my leg is bruised, but fortunately nothing worse happened.

I just have to remember that despite perceptions of things being “just wet,” that black ice can surprise anyone. I think even if I had decent soles with treads on my boots, I would have fallen. Ice doesn’t give footing for any type of boot sole. I guess the moral of the story is always to watch where one walks. Note to self: watch your step. Note to all: “life is short; wear your boots!” 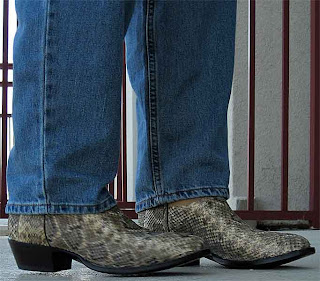 I flew to Minneapolis today. As I was going through airport security at my home airport, of course I had to take the boots off — my Nocona Rattlesnake Cowboy Boots. I put my jacket in the bin and then my boots on top. The boots fell off the jacket and out of the bin as it went through the X-ray. When I was gathering my stuff on the other side, the guy behind me picked up one of my boots and said, “this is a really cool boot, man!” The TSA woman joined in and said, “nice boots — hey (colleague), look at these boots, aren’t they nice?” Then there was a short but general consensus that everyone liked the boots.

I went to sit down to put my boots back on, and several passers-by also paid the same compliment — “nice boots!”. I also heard it several times while changing terminals in Chicago. It’s nice to know that others notice. I just picked them because they are so comfortable and easy to take off and put back on again as one goes through airport security. I wasn’t really thinking about attracting attention or having the boots noticed. But they are distinctive, especially when contrasted with blue jeans.

Archive of Past Posts